With his roots starting at Asia Television (ATV), Philip Keung (姜皓文) went on to establish an acclaimed film career and has been partnering with TVB in recent years. The actor is grateful for his mentor, actor Alex Man (萬梓良), in offering his guidance and helping his acting career take off.

Appearing as a guest on new TVB talk show, Bong Bong Amigo! <諸朋好友>, the award-winning actor talked about his road to stardom. Philip officially debuted in the entertainment industry after placing second runner-up title in the Mr. TV Quest 1986 talent competition. Already working as an extra on filming sets, Philip felt that the competition would help launch his career as a real actor.

Difficult to Work With?

Finding some success at ATV, Philip actively filmed for the station until 2013 but admitted that he made a number of enemies due his blunt personality. “I’m very sure I upset a lot of people back then–I made a lot of writers, producers, camera crew members, and directors upset.”

Philip’s greatest annoyance is when others would watch him work and then whisper quietly on the side. Recalling a time when he was filming a variety show, he chased a producer out of the room because Philip found him to be a distraction. The producer was mumbling the dialogue out loud, which sparked Philip’s annoyance. The actor said abruptly to the producer, “You’re distracting me–can you go outside?” Looking back, Philip realized that he was very critical of the staff and may have upset many people.

Since TVB dominated Hong Kong television broadcasting for decades, did Philip have any feelings of low self-esteem by working at a smaller station? Philip answered that there were indeed moments when he did feel this way. “It’s what everyone said–they said that ATV was a weak station. But time flew by and I spent a lot of years there. I was cultivated by the station–it’s like a home to me.”

Recalling a time when artistes from both stations made appearances for the annual Walk for Millions charity event, TVB actors and actresses would be greeted warmly, but ATV artistes did not receive the same cheers when they walked past the cameras, with the exception of extremely popular artistes.

Although Philip mentioned instigating others while at ATV, the actor became fast friends with veteran actor Alex Man after meeting over dinner one night. Alex, who is extremely passionate about acting and had already mentored Stephen Chow (周星馳) and Gordon Lam (林家棟), formed a close bond with Philip and taught him many things. 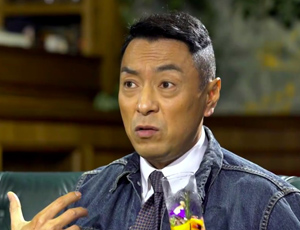 When the two first met, Philip lacked acting jobs and had to supplement his income by working in the food industry. Whenever Alex was in Hong Kong, he would visit Philip at his restaurant and have dinner with him. During this time, Alex also introduced Philip to various producers and people who worked in the film industry to help the actor build a network of connections.

Recognizing Philip’s acting talent, Alex would even reach out personally to film producers to ask them to cast Philip. “One time, Alex said he would call the producer in the middle of the night. I told Alex to not disturb him from sleeping, but Alex said it’s okay as he knows him well. Alex asked him to cast me–he was really concerned about my well being.”

One special memory was when Alex brought Philip to Singapore during one of his shows and formally introduced Philip as his pupil. Alex even gave Philip a bracelet as a gift. Thanking Alex for mentoring him during the rough patches of his career, Philip feels grateful that his career later took off and he gained such diverse filming opportunities.