For as long as one can remember the name Philip Ng (伍允龍), it has always been associated with martial arts.

17 years ago, Philip made his onscreen appearance in the film Born Wild <野獸之瞳>, playing a random thug. Passionate about martial arts and with an experienced background in Choy Li Fut and Wing Chun, Philip left his life in Chicago, United States to further his martial arts practice in Hong Kong. There, he entered the film industry as Nicholas Tse’s (謝霆鋒) martial arts instructor. 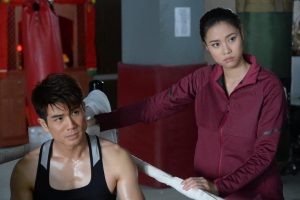 It was an uphill climb for Philip since then, albeit slowly. It wasn’t until 2016’s A Fist Within Four Walls <城寨英雄> when the martial arts actor blew up, successfully putting Philip on the map of stars to-watch. Currently, the 41-year-old is starring in the TVB anniversary drama Fist Fight <兄弟>, leading the series alongside Vincent Wong (王浩信) and Mat Yeung (楊明). Philip also acted as the show’s martial arts director—visiting the set earlier and leaving it later in order to give his input in the action scenes. He was also the cast’s martial arts consultant. It’s been a tiring year for Philip, but it was a job he happily accepted.

“Fortunately, the cast was also very willing to help out,” said Philip. “There are still many things I don’t know, like playing basketball, for example. I became the weakest link in those action scenes. Thankfully, Tiffany Lau (劉穎璇) and Jack Hui (許家傑) knew what to do and helped me out.” 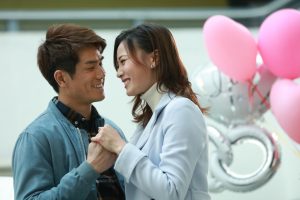 Fist Fight was shot in the Philippines and England. Sharing a romantic storyline with lead actress Rebecca Zhu (朱晨麗), Philip said their very first scene together was a proposal scene in England. “We haven’t met prior to doing that scene. Right when we got off the plane, before I even got the time to shave and shower, we had to do that scene. It was awkward at first, but we spent a lot of time together in England, and we got closer pretty quick.”

As an action star, Philip has to constantly keep fit. To keep his body in optimal shape, Philip would refrain from eating carbs 6 hours before going to bed. He would spend 6 days a week working out at the gym, including training time with his costars. “Once, I had a three-hour break in between scenes, so I went to the gym to do some weight training. I feel asleep in the middle of it. Fortunately, the nap only lasted a few minutes.”

Philip’s real-life “brothers” are Andy On (安志杰) and Vanness Wu (吳建豪), friends he has known for over ten years. Experiencing similar hardships in the early years of their debuts, Philip regards Andy and Vanness as a part of his family. Encountering financial troubles in their early years, the close friends would often lend each other money. Recalling those hardships, Philip said it was his mother’s encouraging words that helped him get through the days. “As long as you move towards your target, no matter how big or small the steps are, you will see improvement.”

He added, “I felt lost when I first joined the industry. From background roles to supporting roles, I honestly felt satisfied about where I was at. If I gave up earlier, I would’ve never met that target. I worked just as hard as everyone else, but the media still liked to call me as a ‘tiny star.’ I feel that all artists would go through a period like that. It’s just the lengths of it are different.”

Known as a martial arts actor, Philip doesn’t mind being typecast. He said, “I am [still] an actor. I just have another skill, and that is to use my body to tell a story.”