Philip Ng to Film a TVB Drama with Linda Chung? 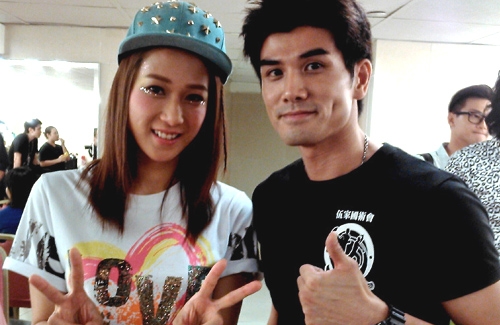 Philip Ng (伍允龍) will be starring as a lead character in an upcoming TVB television drama in 2014, as confirmed by Philip’s manager, Wong Jing (王晶).

“We are currently in preliminary talks with Catherine Tsang (曾勵珍). Nothing is confirmed yet,” said Wong Jing in a recent interview. “We have no problem working with Linda Chung (鍾嘉欣), but I know she has many dramas on hand. We’ll wait for TVB’s arrangements.”

It has been an open secret that Philip is dating Linda. The low-profile couple met while shooting the romantic comedy Love is Not All Around <十分愛> in 2007, and Linda even invited Philip to be the male lead in the music video for her debut single, “Lovers’ World” <2人世界>, which was released in 2008. TVB reportedly got very upset with Linda’s romance with Philip and ordered Philip’s scenes in Linda’s music video to be cut off. Philip’s subsequent appearances at public events also did not receive broadcast treatments from TVB.

For the next few years, Philip and Linda were rarely seen in public together. However, after Philip signed with Wong Jing’s company early last year and had a starring role in the 2013 martial arts film Once Upon a Time in Shanghai <惡戰>, TVB allegedly loosened up and allowed Philip and Linda to acknowledge each other in public. In August of this year, Philip was seen supporting Linda at her first solo concert.

“As long as I’m here no one will have the guts to blacklist him,” said Wong Jing.

According to a source, Wong Jing and TVB’s chairman Charles Chan (陳國強) are close friends, and it took Wong Jing a bit of convincing to cast Philip in a TVB drama. It has been said that TVB is interested in casting Philip because of his martial arts ability.

It is highly likely that Philip will be shooting Anthony Wong’s (黃秋生) new TVB drama, which will begin filming early next year. “I will fight for all opportunities and do my best,” said Philip when asked if he was going to shoot a new TVB drama. Asked if there would be a chance for him to work with Linda, Philip said, “It doesn’t matter if it’s drama or film. It doesn’t matter who the female lead is; I’ll try my best in all of them.”

14 comments to Philip Ng to Film a TVB Drama with Linda Chung?