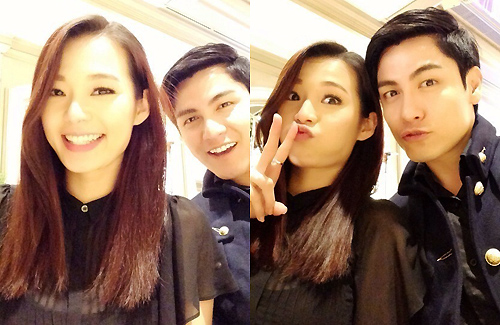 Confirmed to be four months pregnant with the baby due this September, Koni Lui (呂慧儀) is a beautiful expectant mother. Although her waist has thickened, she gained little weight and often showed off her long legs in high heels. Her husband, model/ actor Dickson Wong (黃文迪) is always nearby and has been keeping close watch. Recently, he was spotted parking illegally just to pick up Koni.

The couple was seen heading out to a friends’ gathering. As it was raining, Koni did not accompany her husband to the parking lot. She stayed home while Dickson moved his car to a building near their residence. As it was not a legal parking lot, the security guard left a warning note on the windshield of Dickson’s car when he left it to pick up Koni.

Speaking with the press, Koni revealed that she is now often harassed by the media due to eagerness to take photos of her pregnant state. When she was walking in the parking lot, she was frightened by a reporter shouting her name suddenly. Since the interruptions come without warning and gives her increased anxiety, Koni asked to be given more personal space during her pregnancy.

When asked about Dickson’s carelessness in not helping her to the car, Koni pouted, “He is always like that! You must help me to pester him. I do exercise regularly so my movements are not as clumsy.” Overall, Koni said that Dickson has been very attentive and sweet since she got pregnant. Dickson would follow Jung Da Yeon’s (鄭多燕) body-sculpting dance moves to make her happy. At home, Dickson would be at her beck and call. He would also make sure that her needs are met without her leaving the comforts of her chair.

Koni also revealed that her pregnancy is progressing well although the doctor advised her to watch her diet as her tummy is growing faster than normal.

15 comments to Pregnant Koni Lui is Pampered by Husband