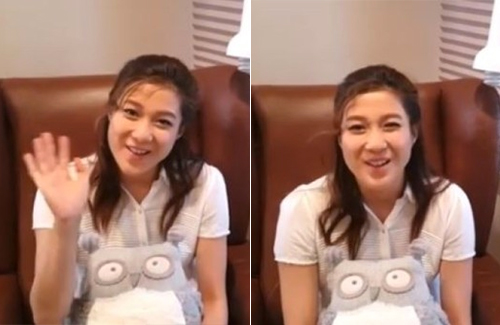 It’s been a while since the fans have last seen Linda Chung (鍾嘉欣), who is currently resting in Vancouver and will soon give birth. Linda’s last appearance on social media was in May, when she announced on Mother’s Day that she is carrying her first child with husband Jeremy Leung.

On Friday, Linda made a surprising appearance in a brief endorsement video dropped by the skincare Bio-essence, which Linda regularly endorses. “Long time no see. I am Linda Chung. Do you guys miss me?” greeted Linda.

In the video, Linda shared with fans some of her skincare tips and endorsed Bio-essence’s latest line. It was modestly filmed; the video was shot inside some kind of home room office. Linda herself sat in an armchair and hid her belly behind a large stuffed animal.

Rumors have been going around since earlier this month that Linda has already secretly delivered her baby in Vancouver. However, the rumor was denied by TVB executive Virginia Lok (樂易玲). According to a new source, Linda will be giving birth something at the end of August.