Having worked at TVB for the past 40 years, producer Miu Siu Ching (梅小青) recently announced her retirement due to health concerns. Her final drama, Forensic Heroes 4 <法證先鋒 IV>, is currently airing to strong reception and the premiere episode received total viewership ratings of 37 points.

Along with her husband, Lau Kar Ho (劉家豪), Miu Siu Ching has been a prominent producer in the Hong Kong television show industry. She produced many of the station’s biggest hits, including The Breaking Point <今生無悔>, The Legendary Ranger <原振俠>, Where the Legend Begins <洛神>, Family Man <絕世好爸>, Can’t Buy Me Love <公主嫁到>, Beyond the Realm of Conscience <宮心計>, and the popular Forensic Heroes franchise.

Although Forensic Heroes 4 has just finished its first week of broadcast, its premiere episode ratings broke viewership records in recent years.  Since the third installment had aired nine years ago, the biggest challenge with filming the fourth one was the incorporation of technologies. With advancement of technology in recent years, the producer spent a good amount of time trying to perfect the script.

Aside from producing popular dramas, Miu Siu Ching has a great eye for casting. All of her chosen artistes have one trait in common. “Each of them has good work ethics. They all made the effort to act well. I want good results and if they want good results as well, then we naturally work well together. In my years of experience, if the cast works well together, then the production itself won’t be too bad in the end,” the producer said.

Casting Linda Chung (鍾嘉欣) in the first installment as a forensic analyst when the actress was still a newcomer, Miu Siu Ching recalled, “The drama needed a character new to the forensics profession who asked a lot of questions but was still sweet in personality. Linda nailed it perfectly and boosted the popularity of her role. She’s very likeable in her cute moments and isn’t pretentious at all. I really like her a lot.” 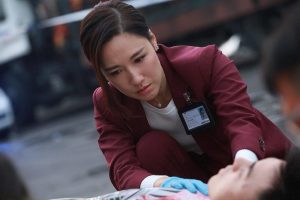 In Forensic Heroes 4, the producer decided to cast Selena Lee (李施嬅). “We needed someone who is fluent in English to play this professional role. Not only is Selena fluent in the language, but her English sounds great. In order to play a forensic pathologist, she even consulted a lot of her friends who worked in the field. She worked really hard in trying to understand the script.”

The artiste Miu Siu Ching will miss working together the most is Michelle Yim (米雪). Mutually admiring each other’s work, the pair has collaborated on several dramas and established a close bond. Michelle agreed to film Forensic Heroes 4 on the spot without even asking for details of her role.

Miu Siu Ching recalls her busiest years when she only slept for two to three hours a night and increasingly relied on sleep medication. When she realized the pills resulted in side effects of suicidal thoughts, she stopped taking the medication.

Besides devoting the majority of her life to work, Miu Siu Ching also put the same amount of effort in raising her son when he was young. When her son was still in school, the producer made sure to take time out to study and work with him.

After four decades of dedication and hard work, Miu Siu Ching can finally take her well-deserved break after retirement. When asked what she plans to do with her free time, she said, “Before, I used to watch television for the sake of work, but now I can choose to watch whatever I want for enjoyment. I think the most important part of enjoying life is doing what you personally love.”

Despite ending her career at TVB, the friendships and bonds Miu Siu Ching has formed over the years are precious and will always remain. She believes they will eventually meet again someday.