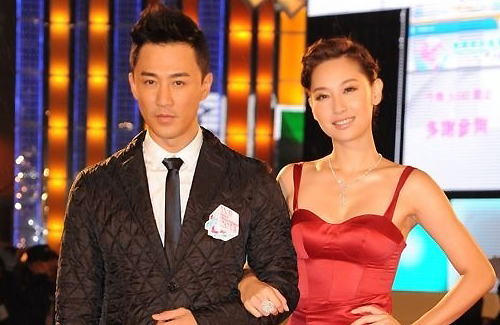 While this year’s Best Actor, Best Actress, and Best Series awards will be determined by audience votes, the other categories in the TVB Anniversary Awards are still in the hands of the executives and staff of TVB.

It was leaked that TVB executives have already decided that Raymond Lam (林峰) will win the My Favorite Male Character Award. Kate Tsui (徐子珊) will beat out Tavia Yeung (楊怡) for the My Favorite Female Character Award. Elena Kong (江美儀) will be the Best Supporting Actress and Power Chan (陳國邦), without Ben Wong’s (黃智賢) presence, will easily scoop up the Best Supporting Actor award.

It is widely believed that Raymond Lam will end up as the Best Actor due to the newly implemented voting format, and others will only be fighting for the consolidation prize of the My Favorite Male Television Role award. Out of all the nominees, Wayne Lai would have been the heavy favorite to win the award. Unfortunately, rumor says that the executives will give the award to Raymond instead.

During last week’s executive meeting to discuss the upcoming Anniversary Awards, Catherina Tsang (曾勵珍) touched on the outstanding performance of Wayne Lai  (黎耀祥). Virginia Lok (樂易玲) immediately took offense and brought up the popularity of Highs and Lows <雷霆掃毒>. When the discussion shifted to My Favorite Male Character Award, six out of the seven executive members reportedly  hinted that they were leaning on Raymond.

Without the clout to turn their decision and knowing that Raymond is one of Virginia’s favorite artists, Catherine will most likely go with the majority’s decision.  If the report is indeed true, Wayne will end up empty handed this year.

“Bring Me My Banner!”

Raymond seems to have known all along that he has Ms. Lok on his side. With the new voting format, Raymond has more than enough fans to win the Best Actor Award. With support from Ms. Lok and the other executives, he will be unstoppable in winning the My Favorite Male Character award.

It was said that Raymond told his fans not to forget to cast their votes for him, and bring a “My Favorite Male Character” banner to the award.

When told that he may not win an award this year, Wayne Lai admitted that the pressure is increasing and the voting will be tight as Raymond has the biggest fan base.  Wayne apparently was not too happy about the rumor, but insisted that the race is not over until all votes are in.

Kate Tsui a Hot Favorite With the Boss

Kate Tsui is likely to win My Favorite Female Character Award. Once again it came down to Virginia Lok and Catherine Tsang’s selections. Catherine went with Tavia Yeung, and Ms. Lok with Kate Tsui.

It was a deadlock until someone brought up the fact that their boss, Charles Chan (陳國強), liked all the positive reviews of Kate’s portrayal as the Drug Queen in Highs and Lows <雷霆掃毒>. So naturally Kate was chosen instead of Tavia.

Another meeting was held a few days ago and the outcome of other award categories was determined. If the rumor is true, Elena Kong will win the Best Supporting Actress Award. Elena’s performance in Silver Spoon, Sterling Shackles <名媛望族> was deemed impressive. In a group where there are no standouts, most of the executives decided to choose her.

Power Chan will pick up the Best Supporting Award. However, it was not an easy decision. Virginia Lok and one other executive called Ben Wong’s performance in Highs and Lows outstanding, while another preferred Power Chan for his portrayal of Pang Sam Shun in The Confidant <大太監>.

The deal breaker was Power Chan’s contract. It turns out that TVB is negotiating with Power Chan on his managerial contract, and an award for him may help seal the deal. The rest of the executives felt that both Ben and Power did well in their roles, but if an award may help to retain Power, so be it. It was reported that because the executives influenced the voting committees, Ben did not gather enough support to make the Top Ten nominees.

It was said that Ben already knew about this decision before the official list was announced. Ben said a producer had approached him and told him that since he already won last year, he may want give someone else a chance this year.  Ben was not happy arguing about how someone can win the Best Actor award for two years in a row, but not the Best Supporting Actor award. Ben was even more upset at not making the nominations.