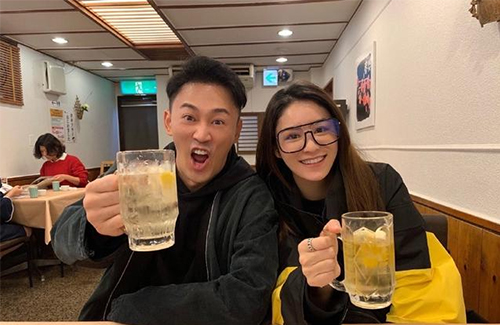 Although Raymond Lam (林峯) and his wife, Carina Zhang (張馨月), tried to keep their relationship and marriage low key, the media never stopped sharing their speculations and thoughts about Raymond’s mysterious other half. From claims that Carina had consulted a witch to win Raymond’s heart, to allegations that Carina recently sought out the help of a traditional Chinese doctor to get pregnant, there is one thing that will stay true—Carina’s going to be staying here for the long run.

On New Year’s Eve 2019, Raymond announced on social media that he is officially married to Carina, who he had been dating since 2018. Prior to dating Raymond, Carina worked as a model, and appeared in a few commercials and promotional clips that netizens have managed to loot up from the Interweb.

Recently, netizens discovered a clip, filmed around the time of Carina’s debut, featuring a “nude” Carina running around a city. The nudity was conveniently bracketed. Many anti-fans had attempted to use the clip as proof of Carina’s promiscuous past and her obsession of getting famous, but Carina had clarified in an old TV interview that she was not nude in the clip, and that the clip was used as promotion for a talent search program.

But the gossip surrounding Carina, who is quiet about her private life, is never-ending. A Hong Kong tabloid magazine reported that Raymond had purchased a home with a market price of HK$106 million, but he did not add Carina’s name to the property. The tabloids are speculating that Raymond may add Carina’s name to the property after she becomes pregnant.