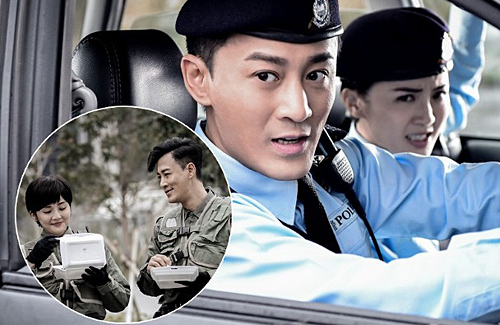 Despite playing a police officer many times, it is the first drama Raymond Lam gets to put on the uniform of a disciplinary unit. “The suit is very heavy, especially the boots we have to run in. After filming chasing scenes, I really admire [PTU members]! It’s a very good experience as I felt how intense the daily life of an officer is. The uniform feels even stiffer than our period drama costume, and that naturally gives you a sense of justice and responsibility,” shared the 39-year-old actor.

Raymond and Charlene last collaborated in The Jade and the Pearl <翡翠明珠> eight years ago. On filming Police Tactical Unit together, Raymond joked, “I can really ‘puke’ facing Charlene the whole year. Last year, we just filmed another movie so I was with her from the start until the end of the year! We have known each other for many years, are very close off-screen, and have great chemistry so every collaboration with her a happy experience.”

Although it has been five years since he last acted in a Hong Kong drama, Raymond found it easy to get back into the tempo. “The entire production is based in Hong Kong, and I saw many veteran actors, cast and crew I’ve worked with, so it feels like the production team is already united. Within days, we were already very clear about what everyone has to do. The filming process is tough but enjoyable.”

When asked about the most memorable scene he has filmed, Raymond replied, “The drama consists of many arcs and cases. As PTU members’ daily lives are condensed into 30 episodes, viewers will get to see lots of different characters and story lines at once, so the quick pace of the drama will be quite a sensory experience!”

While there are already many successful dramas based on the same theme before this, Raymond thinks there is no point making any comparison.“Every time we make a drama, we will not think of comparing. As an actor, we hope that besides watching our drama, viewers will find our characters very relatable, that they will go, ‘This is so realistic, how did they will know these details about us?’ That’s because we’ve done lots of research and got help from PTU to shoot a web drama that’s both realistic and entertaining.”