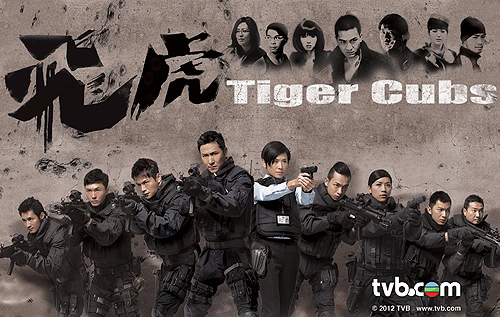 The first episode averaged at 29 points and the last episode peaked at 30 points, making it one of the highest rated TVB series of the year.

First and foremost, Tiger Cubs is a thrilling, adrenaline pumping ride all the way from the start to the finish, for those who like this genre anyway.

What’s good about this series:

There are men galore to fill up every female viewer’s taste and preference in this series. We shall do a further analysis of them:

Joe Ma:  As the SDU A Team Leader, Senior Inspector Chin Hon-to, he is a physically capable and work related excellent police officer. He is also strong, demanding, to the point of being a slave driver to his subordinates, but really you know, it’s because he cares for them and want to ensure that they are trained and fit for the dangerous work they do. For all his manliness and capability at work, he is somewhat clueless about love, courting women and doing romantic gestures, etc.

For his proposal to Christine Kuo’s character, he even had to ask his subordinate, his good friend Asst. Sgt. Chong Chuk Yuen, played by Oscar Leung, to plan and orchestrate the whole proposal scene, (which I felt was quite cheesy by the way), which of course led the girl to fall in love with the guy who planned it, not her boyfriend.

Later Joe develops a love arc with Senior Inspector Chong Chuk Wah, OCTB Team Inspector, played by Jessica Hsuan. Both of them are workaholics, so their romance and love will be one filled with criminals, unsolved crimes and police action, which suits them just fine. Him Law: He is cute and the most beefy of the lot, with his well worked out pecs and legs. There are lots of gratuitous shower scenes of him and Vincent Wong for a TVB series.

He is from a well to do family and at first he was rash, impatient, impulsive and arrogant. He clashed with his Team Leader and insisted that Joe Ma was picking on him unfairly when the latter was just being strict with him in order for him to learn teamwork and discipline.

He acts passably well, he was believable as a testosterone charged, rash young man. I think many girls fell for his cute face and muscular body. Later on he fit in with the team and even struck up a close friendship with Mandy Wong’s Probationary Inspector So Man Keung. He is one of the most experienced sniper on A Team, and the scenes where he is waiting, hiding and concentrating as a sniper, he looks really cool. Oscar Leung has bulked up for this role and he looks very good. Not only his body but even his face looks broader and manly.

He loves to wink and he did it once or twice on the show and I believe that’s the reason why Christine Kuo’s air stewardess role fell for him.

Christine’s character was throwing herself at him, which he tried valiantly to reject her because she used to be Inspector Chin’s fiancée, and there is a code of honor between men, you know, good friends do not steal each other’s women.

In fact, Oscar Leung’s character had met Christine Kuo first and fell for her at first sight, but he never told her of his feelings, and Joe Ma professed his interest in her first.

I also like Oscar’s synergy with Jessica Hsuan. He is a good actor, and he brings to life his characters with some of his unique qualities,  cheerfulness, and cuteness. In my mind, Oscar should always be this fit, and stop playing lousy, wastrel characters, which he did well as well. I think he is a talented actor and hopefully, over time will be given chances to prove himself as the lead rather than secondary characters. He acts so well that he is in danger of being typecast and hated in lousy roles.

Vincent Wong: I should make a brief commentary about him too, as I know that some female viewers prefer him. Depending on your taste, he is a nice change for some from the over testosterone filled Him Law. He is a sniper and often works with Oscar Leung on stakeouts.

Unlike the other SDU men, he has the most insecurity because his father and elder brother are both outstanding police officers and he feels the pressure if he cannot perform as well as them.

He lends a bout of insecurity and vulnerability when he doubted his own abilities, nothing that good o’ Team Leader Joe Ma could not pep talk out of anyway. He is a genuine nice guy who goes out of his way to help even poor, old people like volunteering his time and weekends with them.

In terms of physical attributes, he looks tall, and his body as fit, which I guess was the reason why he got the shower scenes with Him Law. He is more lean than bulky, which some girls prefer.

His chance to shine was in the last scene where Kenneth Ma and JJ Jia tortured him. One really felt sorry for him then, and we agreed that he succeed as a SDU and his family would be very proud of him.

I thought Vincent Wong delivered his performance. He is gradually becoming a suitable actor, as I remember he delivers adequately in roles in other TVB series too. What he is needs is perhaps a more magnetic and dynamic screen presence which for now he seems not to command yet.

I could go on about the rest of the characters, which are all interesting, for example, Kenneth Ma’s turn as a sexy, rough, violent villain. He was slightly maniacal with his wife on screen, played by JJ Jia. He was very good as a crazy, violent terrorist which made my heart beat faster whenever he came on screen. Was it because I was afraid of what the crazy man would do to harm the innocent? Was it because of his cool, almost shaven head? Jessica Hsuan puts in a solid performance as expected from a veteran actress of her caliber, but gives it an interesting spin as a slightly suicidal OCTB Team Inspector. I think the depressive, suicidal dimension to her character, out of a place as a police officer, was interesting. How would you handle a police officer, dedicated to her duty and harbors a secret death wish? She feels guilty about failing to save her fiancé when he was killed in a terrorist attack.

Christine Kuo generally failed as a cute, bubbly air stewardess which should gain more sympathy, but instead turns off due to poor acting. Many females felt that she was overly bimbotic in her portrayal. Actually for her role, a better actress would be able to portray great dynamics with both Joe Ma and Oscar Leung, and still gain some sympathy from viewers when she was rejected repeatedly by Oscar. Come on, so gorgeous and still rejected? Bet that does not happen much in real life! She did not annoy me though; speaking on behalf of the guys out there, I think she has a great figure, with a sweet face and is gorgeous.

If there is anything that I could fault is that police and action-packed series may not be everyone’s cup of tea, especially for those who prefer deeper meanings in their dramas. In some scenes, the poseur of the SDU’s coolness is slightly overdone and repeated. Okay, okay we get it! They are cool, manly and Tiger Cubs!

But for those who like this genre, in all it was a very satisfying and thrilling ride from start to finish.

This review is written by Canto, a Contributing Writer at JayneStars.com.