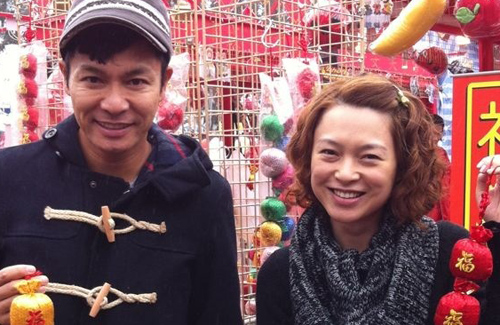 Roger Kwok (郭晉安) always looked forward to the Lunar New Year holidays. Not only is this festive holiday one of the world’s oldest surviving celebration, it is also a holiday for family, friends, and new hopes. As for Roger, the Lunar New Year is that time of the year when he gets to see his family… in the sunlight!

“It’s a rare occasion for me to be with my family in the day!” Roger sweetly said. “On the first day of the new year, we will greet our seniors in the morning. We will all send each other our blessings. It is a time for happiness and harmony!”

Rising to become TVB’s number one brother is not an easy feat. Roger has used up many sleepless nights and weary days to maintain his leading actor status for the past twenty years. But the traditional, family-oriented Roger knows when to stop. After marrying Cindy Au (歐倩怡) in 2006, Roger settled down and slowed down his workload. “Family always comes first,” said Roger.

Every year, Roger will spend some time off from work to bring his family on a vacation trip. For this year’s Lunar holiday trip, Roger and Cindy plan to bring their kids to somewhere hot. Roger said, “Brad is turning five years old soon, and Blair is only one year old. They are still too young. If we bring them to museums or historical landmarks, they wouldn’t understand how to appreciate them. They’re also not old enough to ski yet, so we will bring them to an amusement park instead. Brad also likes to swim, so we will choose a warmer vacation spot.” Both Roger and Cindy come from fairly traditional families. Lunar New Year customs and traditions should never be neglected. As Brad has recently learned how to make a New Year couplet at school, Cindy and Brad have been making their own couplets to hang around the house. Cindy also enjoys preparing for the traditional New Year candy box. On the other hand, Roger enjoys shopping in the flower market, and would often take Brad with him.

Roger revealed that he and Cindy have both prepared up to $70,000 HKD of red envelopes to pass out to their relatives, friends, and co-workers. As for Brad and Blair’s red pocket money, Cindy laughed, “Brad and Blair each have a piggy bank to keep their lucky money. They are still young, so we will help them manage their banks for now. The money will be saved for their future education.”

Although the couple waited seven years before getting married, Roger and Cindy had already decided to live together one year into their relationship. “Our financial situation at the time was not as good as it is now. The two of us lived in a three to four hundred feet flat, with one living room and one bedroom. We could literally see everything with just one look around the flat.”

When asked of the most romantic memory they had shared with each other, Roger immediately laughed. “One year, we went to a very expensive French restaurant in Yau Ma Tei for Valentine’s Day. I gave Cindy 24 red roses, but she didn’t look very appreciative!” An extremely shocked Cindy merely stood frozen, staring at Roger. It was then when Roger realized that Cindy was not the romantic type.

“I’ve matured. I used to think being romantic is all about creating the right environment, but now, I’ve learned that as long as two people are together, and when you can only see her in your eyes, it can be the most romantic thing in the world. We will never know what will happen in the future. I wish to live in the now, to cherish every single moment we share with each other.”

18 comments to Roger Kwok Surrounded by Warmth of Family