Miss Chinese International 2012 Kelly Cheung (張曦雯)  has been growing her fan base and receiving more attention ever since she won Most Improved Actress in 2019. As a result of her hard work, TVB granted her more career-enhancing opportunities that allowed her to learn from incredible veteran actors. For example, she collaborated with Roger Kwok (郭晉安) in Big White Duel <白色強人> and will work with him again in the upcoming sequel. On October 14, Kelly shared that Roger is an amazing mentor during the blessing ceremony for the tentatively titled cooking show, Tonight’s Dinner Guest <今晚請客>, in which she appears as a guest.

Big White Duel 2 <白色強人II>, which is set to commence filming in November and has held several costume fittings, will also star veteran actor Moses Chan (陳豪). Kelly expressed, “I feel more comfortable knowing that Roger will look after me. I will also take this opportunity to learn from Moses too. If Roger doesn’t think I am too annoying, I will continue to bother him. He gave me a lot of tips during the first drama.”

When asked if she sees Roger as a mentor, she said, “Of course. He is my mentor on-screen and off-screen. I hope that I won’t disappoint everyone.” 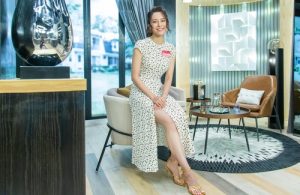 Given that Kelly is a guest on Tonight’s Dinner Guest, many were curious to know if the beautiful actress could cook. To this, she said that she is well-versed in both Chinese and Western cuisine. However, with Alice Chan (陳煒) present, she decided to cook a Western meal so that she doesn’t embarrass herself in front of Alice, who has had a cooking show in the past.

Since Kelly is quite the chef, her boyfriend must be a lucky man. She shared, “No matter what I make, he says it’s good. I can’t tell if he’s being genuine or just trying not to hurt my feelings.”