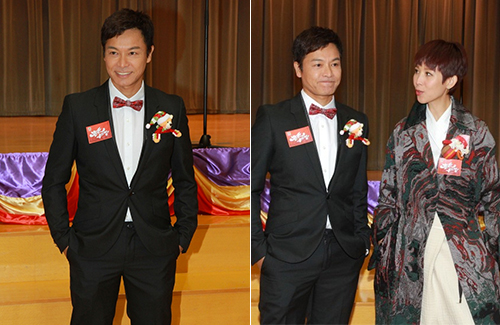 Roger Kwok (郭晉安) and Ada Choi (蔡少芬) aren’t finished with each other yet. The Oh My Grad <老表，畢業喇！> actors, who were seen shooting a scene for the upcoming drama in Kowloon Bay on Thursday, are already talking about working together again in future projects.

Oh My Grad—the third installment to Wong Cho-lam’s (王祖藍) Inbound Troubles series <老表系列>, is Roger and Ada’s first collaboration since TVB’s two-part epic At the Threshold of an Era <創世紀> in 1999. Oh My Grad has one more month left before filming wraps up.

Roger remarked that he has great chemistry with Ada on the show. Though rewrites and script changes were common, Ada’s diligence brought the cast back on track. “We always get off work in time when she’s around,” said Roger.

In August, TVB announced plans to produce Threshold Again <再創世紀>, a sequel to At the Threshold of an Era. The drama is currently in pre-production. Roger, who starred in the original series with Ada and Gallen Lo (羅嘉良), said he was courted for a role, but plans have not been finalized yet.

“I do look forward to creating a classic again,” said Roger carefully. “I actually never watched the original series myself because they aired it as we filmed it.” As for returning for the sequel, Roger said, “I am free to do it, however, I don’t know who’s going to be in the cast.”

As for whether or not Ada would appear alongside Roger in Threshold Again, Roger said, “I did ask her if she’s interested in returning, as I heard [TVB] wants to [cast her]. I do hope she says yes, but her schedule is fully booked. She’s actually really busy. It’s so lucky to be her. So many shows to do.”