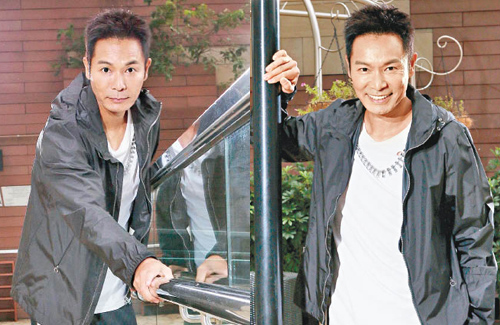 Best known for his role of simpleton “Ah Wong”, Roger Kwok’s portrayals of both good and evil characters are spot-on.

As the only actor in At the Threshold of An Era (創世紀) who returned for the sequel Another Era <再創世紀> after 19 years, three-time TV King Roger Kwok‘s (郭晉安) convincing take on Leo, the charismatic but unscrupulous businessman, has fans unnerved by his heinous smiles and chilling conviction.

The conniving role is a sharp contrast to the simple-minded and naive Ma Chi Keung, who along with Sunny Chan (陳錦鴻) and Gallen Lo (羅嘉良) made the 2000 TVB series an enduring classic. This time, Roger prepped for the challenging role by communicating with ‘wife’ Tavia Yeung (楊怡) in advance to discuss how they would portray certain scenes together.

Roger said, “I loved how Jack Nicholson brought the joker character to life in Batman. His character was evil and yet not detestable, some are even drawn to his charming duplicity, so I referenced it.” Adding that his character would especially resonate with younger audiences, he said, “Who would dare to say they have never thought of taking shortcuts or crossing lines in life? In a way, what my character did was to accomplish what people secretly desired, but dared not.”

Grateful for His Chances at TVB

When asked how he would feel if he had to tackle the role of “Ma Chi-keung” again now, Roger said he would not be able to replicate the same performance. He said, “The ‘actor’ Roger Kwok has undergone many changes throughout 19 years…such as marriage, fatherhood, encountering a low point in my career, and a personal economic crisis. In the past, I was much more sensuous and romantic, and I tried to balance this out by being more practical in my representation of the role. But now, I have become a more level-headed person, and thus have to put more sensuality into my acting.”

Not A “Tiger Dad”

Compared to other actors and peers, Roger’s path to success seemed to have been more obstacle-filled, but he does not regret having taken a longer route. The 54-year old actor said, “I only entered the industry to make a living, and I’ve always disliked having to please others or pull strings [to make things easier], so naturally my career was not as smooth-sailing. But the experience I got through it all is something which [money] can’t buy.”

Perhaps unlike most parents, Roger also believes in letting his children experience life for themselves instead of protecting them from the hurdles that their own father had faced. “It might not be a bad thing, even if they end up having a tougher path to success.”

While he is a chief manipulator of the financial markets in Another Era, in real life Roger is wary of the risks of trading in stocks and shares, having lost substantial savings once. Later on, he experimented in blue-chip stocks but eventually let go of them as they took a long time to yield profits. Now, the practical actor said he would rather invest in property and steer clear of stocks.