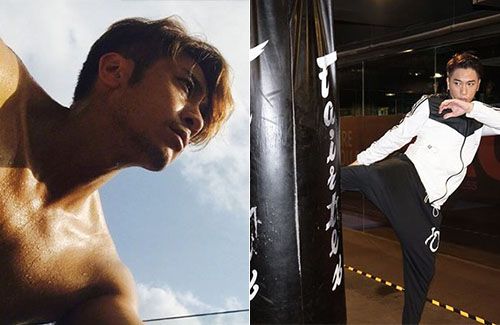 Portraying a paramilitary officer in Shaw Brother’s upcoming web drama Flying Tiger <飛虎極戰>, Ron Ng (吳卓羲) worked on losing weight in the past few months. The 37-year-old said he has already lost over ten pounds, and is planning on losing ten more.

The action drama, which also stars Michael Miu (苗僑偉) and Bosco Wong (黃宗澤), focuses on Hong Kong’s famous paramilitary unit, the Special Duties Unit. Ron has been working out ever since he got the casting offer.

“Sam Gor and Bosco are both really fit,” said Ron. “I have to get to their level. I’ve been doing a lot of running recently, but I’m also putting in some weight training. My goal isn’t to be very muscular, but I would like to have a fitter body for the screen.”

Ron hasn’t reached his goal yet, but he’s determined to get there. He then promised that he’ll show off his muscles when he’s done.

As for his diet, Ron said, “Actually, eating spicy food is helping me lose weight. It does raise metabolism and helps burn some fat.”

The action-packed drama isn’t exactly a new thing for the actor, who is well-known for being in police dramas like The Academy <學警雄心> and Black Heart White Soul <忠奸人>. He also portrays a police officer in the new film, Shock Wave <拆彈專家>.

“As a professional actor, I would try to do all my stunts without any help,” said Ron. “But I’m not as young as I used to be, so I’m being a lot more careful with my body. I’ll try to protect myself as much as I can.”

Ron said he’s learned the importance of wearing protective gear when doing action stunts. As he did not have the habit of wearing knee supports when he was younger, he sustained easily-avoidable knee injuries.