Ron Ng “Sleeps” With Two Women in One Day 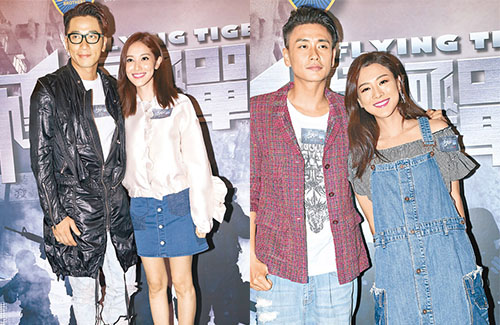 Bosco, who plays an SDU officer on the show, revealed to reporters that Ron and Grace had “many” bed scenes, to which Ron said, “Nope, just about one.” When Grace shared with reporters that Ron got to sleep with two girls on the same day, Ron quickly explained, “I was arranged to film two bed scenes on the same day, with two different girls.” Bosco added, “Yes! He complained to me about that!”

Ron then went on to explain that the production company coincidentally booked the same scene on the same day. “In the morning it was with Miss Chan (Grace), and in the afternoon it was with Jeana Ho (何佩瑜).” Asking Ron if he should compare the two, Ron said, “We don’t do that.” (Was it great?) “We don’t talk about that either.”

Bosco added, “He complained to me about it!” Ron exclaimed, “What? I just wanted advice!” Bosco said, “You think I have a lot of advice for that?” Ron clarified, “I meant to ask Sam Gor!”

Asking if Grace had to tell boyfriend Kevin Cheng (鄭嘉穎) about the scene, Grace said, “I did talk about it.” Ron said, “No wonder he didn’t answer my call!”

Bosco, on the other hand, has a romantic storyline with Venus Wong (王敏奕). They share an innocent on the show, saying, “We don’t share any bed scenes, but there are light kissing scenes here and there. Ron was in charge of the love action scenes, haha!”