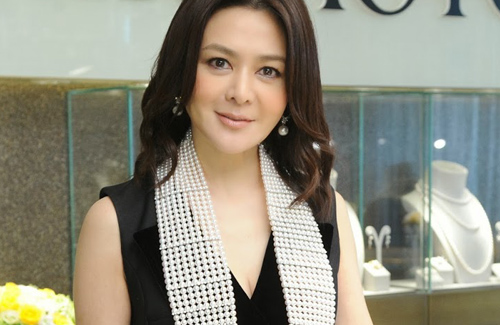 Fifty-two-year-old retired Hong Kong actress Rosamund Kwan (關之琳) and 58-year-old Taiwanese businessman Chen Tai Ming (陳泰銘) have dated for many years. Although their relationship was confirmed by sources in 2010, they are rarely seen together in public. When they do meet publicly, they would purposely keep a distance to maintain their privacy. However, the couple seems to have become less discreet in recent years. On October 22, Rosamund and Chen Tai Ming were spotted at Central’s IFC shopping for glasses. While Chen was getting his eyes checked, Rosamund patiently waited outside in the lounge. When Chen was done with his appointment and went to select glasses, Rosamund tried on some sunglasses. According to gossip reports, Rosamund and Chen were very affectionate and interacted like a married couple—Rosamund helped Chen adjust his tie and Chen pulled out a chair for Rosamund to sit in when she looked at sunglasses.

Half an hour later, Rosamund and Chen left the eyewear shop arm in arm. Despite being public figures, Rosamund and Chen did not seem to mind the attention they were getting. They took ten minutes to walk from the shopping mall to their car outside.