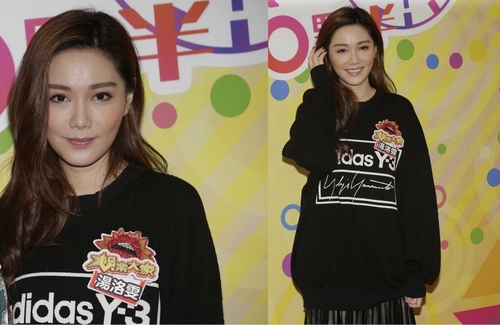 When Roxanne Tong (湯洛雯) recently made a guest appearance on TVB variety show Liza’s Online <娛樂大家十點半>, reporters took the chance to ask her about her highly praised performance in Forensic Heroes IV <法證先鋒IV>. The 32-year-old actress expressed that she honestly gave it her all for the drama.

“I was really worried that I didn’t do well because of my limited skills and having to prepare and perform in such a short time frame, but I am very happy that it turned out well. Though, of course, there is still room for improvement,” Roxanne shared.

Portraying a go-getter journalist in Forensic Heroes IV, the actress received netizens’ praises for her acting skills and beautiful looks. However, in Roxanne’s eyes, she still thinks she didn’t lose enough weight for the role and described herself as a Tyrannosaurus in her first scene.

She said, “My weight loss plan wasn’t successful, and I didn’t get fit enough because of the time constraint. I also didn’t want to lose it so quickly, as that would be very unhealthy.”

Since Roxanne slimmed-down toward the latter half of filming and the scenes weren’t filmed in order, she would appear chubby in one scene and thinner in the next. “There is no continuity when it comes to my figure. Everyone will probably wonder why it changed so fast,” she lamented.