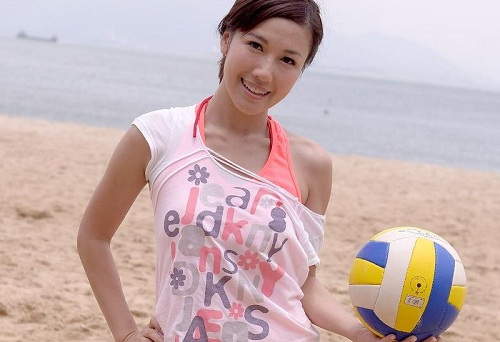 While studying in Toronto, Canada, both Selena and Aimee had played on school volleyball teams. Despite this, Ruco and Raymond’s volleyball skills were still better than the two women. Since Cilla Lok’s volleyball skills were the weakest, she was teased by the rest of the cast for her petitie stature. Aimee brazenly lodged the volleyball over the net, directly at Cilla’s face! Raymond said, “The production crew especially prepared a bomb for her, letting her bounce around for some volleyball action!”

Cilla teased Raymond and Ruco for wearing sunglasses during the volleyball game. She thought that the men wore sunglasses to mask their eye diseases!

Since breaking up with Patrick Tang (鄧健泓), Selena Li has been photographed going out with various men and frequenting nightclubs. However, she maintained that she was still single  and wished to date. She lamented that the paparazzi often frightened away her male friends who were camera shy, ruining her romantic chances!

Selena told Aimee, “It’s great that you have a steady boyfriend. I am not dating anyone right now. Even if I wished to date, it’s difficult. When I had a meal with a well-off friend, tabloids wrote that I was pursued by a wealthy tycoon! There is no one brave enough to pursue me anymore!”

Jayne: More TVB idol news for everyone! Fortunately, Raymond Wong ditched the dreadful curly wig and cut his hair short in “Love Exceeds the Coastline.” The drama name is a mouthful (in both Chinese and English) which has fans mumbling the title.

Since Selena is single, I truly wish that she would consider dating Kenneth Ma!