The couple shared heartwarming pictures of their amusement park and temple visits. As this is Quinta’s first time travelling with them, they brought her to pay respects to Nan Hai Guan Yin. It was  an exhausting journey to Putuo Mountain, as they had to take a taxi and boat before finally walking to the destination. However, Quinta was an angel and was willing to walk for a long time without asking to be carried. This trip was the perfect vacation for Phoebe, because her mother is originally from Ningbo so she was able to visit her extended family as well. 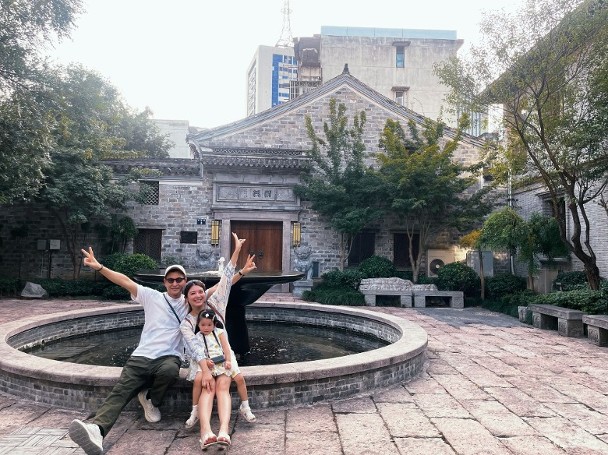 James and Tony Miss Their Wives

Other cast members Jinny Ng (吳若希), James Kwan (吳業坤), Joey Thye (戴祖儀), and Tony Hung (洪永城) are also in Ningbo filming, but they are less lucky than Ruco, as their spouses are back in Hong Kong.

James has been updating his social media often, likely because he is missing his wife Aiko. Recently, he posted a photo of them horseback riding and captioned it with, “Slowly moving forward with my partner.” Even though they are separated long distance, Aiko has been keeping busy, enjoying local dishes such as curry fish balls and Beijing roast duck.

Tony also had to leave behind his wife and daughter as well. Nervous that his daughter will not recognize him when he returns home, he often video calls her. He joked that his baby daughter has gained a lot of weight and he is tempted to take a bite of her! During his filming breaks, Tony soaked in the local sights and visited Xiangshan Temple.