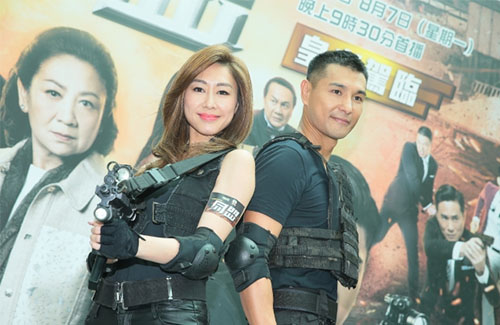 The martial arts galore is Nina Paw’s first TVB drama, and Ruco and Nancy’s second collaboration after last year’s hit series A Fist Within Four Walls <城寨英雄>. The story centers on a powerful businesswoman who employs extreme methods to prevent her corporate empire from falling into traitor hands.

Ruco Nearly Shows Off His Bare Butt, Nancy: “I Didn’t See Anything”

In a recent clip shared by TVB, Yuen Tsing-yan (Nancy) attempts to help an unwilling Ko Tsz-kit (Ruco) tend a wound on his butt. She pulls down his pants and admires the sight in front of her. When asked if Ruco would be willing to reenact the scene with Nancy at the promotion event, Ruco joked, “I’ll only do it if you donate money. I’ve already revealed half of it on camera.”

“A lot of [his butt] was still covered up,” said Nancy. “It was just the camerawork that made it look like I did a lot more. I actually didn’t see anything.”

Continuing their love-hate dynamic from Four Walls, Ruco and Nancy will have a friendly rivalry in their upcoming show. Nancy plays Ruco’s enthusiastic bodyguard who likes to put him in tricky situations. Nancy shared, “There is one scene where we both fall into the back of a truck. Ruco jumped in first, and then my butt landed on his face. We really did do it!”

Ruco’s Face Turns Dark at the Mention of Phoebe Sin

Asking if his rumored girlfriend, Phoebe Sin (單文柔), would get jealous of his physically-intimate interactions with Nancy on-screen, Ruco immediately turned dark in the face. Voice dropping to a deeper tone, he said, “I am an actor. What does that got to do with [my] girlfriend? It’s better to ask questions about the drama. No reason to create an awkward atmosphere.”

After a few seconds of awkward silence, Nancy changed topics and said she had to do a lot of dangerous stunts for The Unholy Alliance; the crew had to take extra precautions.

When Phoebe Sin was brought up again, Nancy was asked why she immediately jumped off-camera when Ruco and Phoebe were being interviewed together for TVB’s streaming app, big big channel, a few days ago. Nancy said, “I didn’t know [they were being interviewed]. The backstage was crowded. I actually had no idea what was going on.”

In regards to reports saying that Phoebe was following Ruco all night, the TV King explained, reluctantly, “When it comes to big events like those, it’s a huge group of people together. There’s no reason to avoid anything. You just do what you have to do. And besides, everyone knows how much space we actually have for interviews.”

68-year-old Nina Paw shredded her nurturing, motherly image for a strong, Wu Zetian-esque role in The Unholy Alliance. Her character is a sharp shooter, and Nina had to spend hours at a time to learn how to wield a gun correctly.

Seeing her character in action on-camera made her emotional. The Film Queen said, “I remember there was this one scene where Ruco held my hand as we ran. Ruco was too fast for me, and my legs ended up cramping. I NG’ed three times.”

The Unholy Alliance has been the biggest challenge in her prolific acting career thus far. “The drama was a really big challenge for my physicality, especially at this age. I’ve tried filming for 30 hours straight. It was intense. I didn’t dare to get sick. Good thing there were many action scenes, so that got me to work out a bit. I’m happy about that!”

Nina joked that TVB made her realize that she actually isn’t fit enough, saying, “Every artist here is super fit, so I too have been taking care of my diet and exercise lately. Filming this drama definitely helped me lose a few pounds.”