Savio Tsang (曾偉權) may not be a leading star, but he needs no introduction.

For the common viewer, Savio’s face is easily one of the most recognized faces on Hong Kong television. His fall from ATV leading star to TVB greenleaf can be described as unfortunate, but for Savio, he no longer cares about such titles.

The TVB veteran actor grew up in a blue collar working household. His family had worked in a lard factory, and that reason alone was enough for Savio to feel alone and constantly misunderstood as a child. 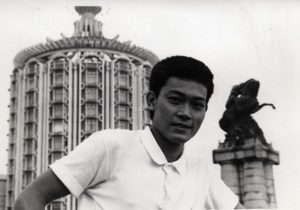 “I was afraid to make friends because I knew how frustrating that smell was,” he said. “I had to help out at home, so I’m always working in the factory. It’s dirty and it smells bad. I always wear my cap and keep my head down when I leave school. I didn’t want people to recognize me.”

But now, at 57 years old, Savio is starting to see the more positive side of his rough upbringing. “To put it badly, I’ve always felt inferior. On the other hand, it made me stronger, and I knew how to take care of my problems.”

When he was a teenager, his father sent him to Macau to attend a boarding school so Savio could learn how to be more independent. “It was like you’re training for the army,” Savio described. “The school has strict discipline. At the time, the long Wynners hairstyle was very popular, but once I got in the school I had to shave it all off. We all felt that we looked country. We all have a set schedule to follow everyday, from eating to showering. We’re not allowed to talk walking between periods. Some students couldn’t handle it. I’d hear my roommates cry when we’re all in bed. It’s like listening to a symphony.”

Upon graduation, Savio returned to Hong Kong to star a career in selling wallpaper. Slowly working his way up from delivering products to professionally hanging wallpapers, Savio remained in the job for four years before he decided to audition to become a TV actor with a few friends.

From ATV to TVB

The year was 1981—both ATV (then known as Rediffusion TV) and TVB were holding auditions for new TV artistes. Not wanting to stay in the long line of people for TVB auditions, Savio and his friends chose ATV. After the initial interview, Savio was accepted without a need for additional auditions.

One of the first TV artistes that Savio had become friends with was Kenny Ho (何家勁), who was his RTV artiste training classmate. “I knew he’d be a star once I met him,” said Savio. “He’s extremely clever. During martial arts classes, he’d always be the first one to learn the choreography. He’s very suitable for this job. I’m a slow learner but I’m also more detailed.”

It didn’t take long for Kenny Ho to become one of ATV’s top stars. Savio himself also fared well—he had opportunities to play leads in many ATV dramas, including 1984’s Empress Wu <武則天> with Petrina Fung (馮寶寶). Lead actor Tony Liu (劉永) had to be replaced after he was arrested in Taiwan for assault. Savio replaced his role at episode 22.

“I was shooting another drama at the time,” said Savio. “After finishing that one I was told that I had to do another show next door. I didn’t go home all week. Nonetheless, I had a great time working with Petrina Fung. I learned a lot from her.”

After waiting out his contract with ATV, Savio moved to TVB. Although he was paid less, his public recognition increased, even earning opportunities to collaborate with well-known stars, including 1991’s A New Life <命運迷宮> with Donnie Yen (甄子丹).

“His moves are super fast. He told us that we should always duck when we see his legs. He’s really good at taking care of others. While a lot of us tend to be more passive, Donnie is aggressive in the sense that he would disagree with the director, but not without good reason. He accepts criticism well, too. I really admire him.” 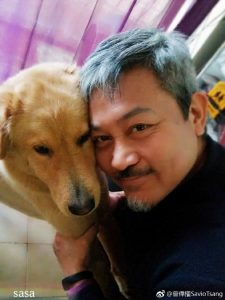 An animal lover, Savio dedicates his free time to his pets. At his peak, he adopted seven dogs, all of which were abandoned by previous owners. Currently, Savio has two dogs and one cat. Because he frequently travels to Mainland China for work, he can’t raise as many pets as before.

“They’re the best partners,” he said. “When my ex-girlfriend and I would argue on the phone, my dogs would get scared and run away. Once I put down the phone, they would come back and lay their heads on my legs. They know I was unhappy and was trying to give me warmth. How can you not love them?”