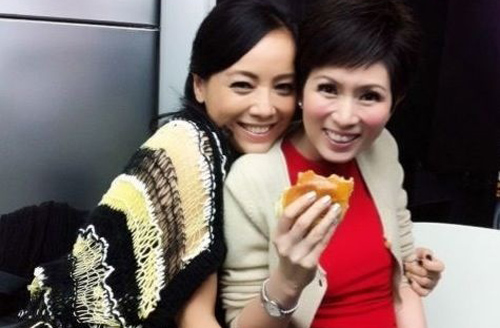 The death of former TVB actress, Jacqueline Law (羅慧娟), has deeply saddened her family and friends. The 46-year-old had battled pancreatic cancer for the last two years and was hospitalized several times this year, before passing away on June 30, 2012. While Sheren Tang  (鄧萃雯), Ada Choi (蔡少芬), and Noel Leung (梁小冰) mourned her death, the women remained optimistic that they can continue their friendship once again in Heaven.

As a Christian, Jacqueline was deeply spiritual and continued to bring happiness despite battling pancreatic cancer. She recorded her emotional and physical struggles in a DVD collection, hoping to help others who were also struggling with a debilitating illness. It was Jacqueline’s habit of putting others before herself and suffering in silence  that made her friends grieve deeply for her. Two months earlier, Jacqueline had continued to assure the public that she was “progressing well with treatment.”

Although Jacqueline’s death came as a sudden shock to fans, it was not a secret among her friends who were only too aware of her imminent death. Jacqueline was fondly remembered by her former TVB colleagues and Christian friends.

Since Sheren Tang and Ada Choi were currently filming TVB drama, Beauty at War <金枝慾孽 (貳)> in Hengdian, China, they were unable to travel to Singapore to attend Jacqueline’s funeral. Expressing their heartfelt loss, the women bid farewell to Jacqueline through poetic Weibo blog entries.

Sheren Tang wrote, “Jacqueline has fought the good fight and run the way she has run best…. Her departure is only temporary; we will meet in Heaven once again!  Her suffering in life has come to an end; she will peacefully rest now. In the arms of the Lord, she may now rest as a carefree little child! She is my forever Angel Law. ‘I think you will see the day….'”

Ada Choi also saw death as a continuity of existence in another form. Ada wrote, “Seeing the sky so beautiful with the soft, white light reminds me of your beautiful face. I think of your ivory skin and your sweet, loud laughter…. Your enthusiasm in life has affected many others in a positive manner. Jacqueline, I miss you! Thank you for your love! We will see each other in Heaven again!”

Noel Leung also shared a deep friendship with Jacqueline for many years. In her last days of life, Jacqueline held a farewell ceremony, gathering together her closest friends to share precious moments together. Noel told Jacqueline at the time, “I love you; I am very glad to have a good sister like you!”

Noel fondly recalled the memories of traveling together with Jacqueline to promote the mission of Christianity together.

Jayne: It is hard to say farewell to a good friend. Maybe we should hold less grudges in life and give more of ourselves to our loved ones while we are able to. All things come to an end and all too often, they end too soon and without warning.

If we were to see death as a temporary separation, where life continues to exist in another form, it is usually easier to bear for the people left behind. In spirit, may Jacqueline always be remembered by her loved ones.