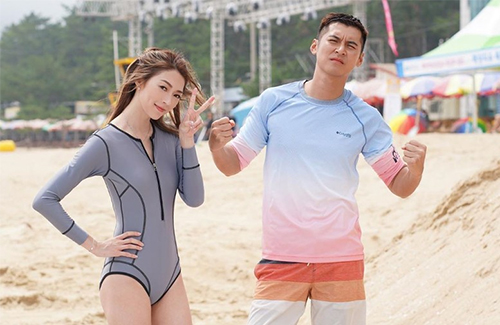 This may just be baseless rumors, of course, but Shiga Lin (連詩雅) and Carlos Chan (陳家樂) have definitely gotten closer after collaborating in a travel show last year. The latest reports claim that Carlos had visited Shiga’s home late at night.

The 31-year-old singer, who will be making her TV drama comeback with TVB’s Life After Death <那些我愛過的人>, met Carlos for the first time through the TVB travel show 12 Summers <12個夏天>, where they traveled to Wando County, South Korea, last year. Due to their similar ages and experiences, Shiga and Carlos quickly became friends, and kept in touch after the show.

As Shiga was still dating Terry Chui (徐浩) at the time, and Carlos was being linked with Jeannie Chan (陳瀅), there were no claims that Shiga and Carlos’ relationship went beyond friendship. It wasn’t until earlier this year, when Shiga made a guest appearance on Carlos’ new online show 3 Fools <三大當關>, when dating rumors started swirling.

According to reports, Shiga did not use the platform to promote any new material, and was there solely to support Carlos. Allegedly, Carlos had invited to Shiga for dinner after filming the show.

Shiga dated Terry, a musician, for three years before quietly splitting late last year. Shiga did not confirm the split until this April, when she confessed that their split was due to them not sharing the same values in life and marriage.

5 comments to Shiga Lin May Be Secretly Dating Carlos Chan