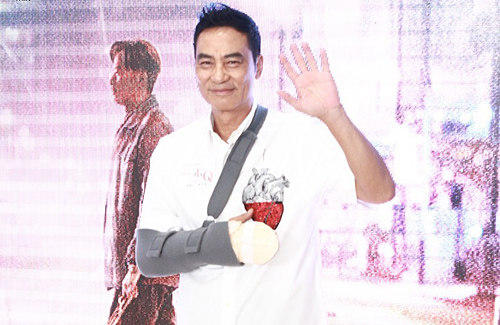 Simon Yam (任達華) was recently a victim of a random knife attack at a promotional event in Zhongshan, China. On the road to a speedy recovery, he recently made another appearance in Guangzhou with the backing of over ten bodyguards. Last week, he made sure to bring two bodyguards along at a fundraising event in Hong Kong.

Simon’s right hand was still in a cast, but he was very positive, “After the incident, many friends messaged me their support. I feel so grateful! My wife and daughter have lost a lot of weight from fussing over me. My daughter also made me dessert. I have received messages from fans as far as Europe; even Angelina Jolie messaged me! The world is full of love!”

Simon’s wife and daughter have been cooking many delicious foods for him and he exclaimed that he has gained one pound so far.

As to when he will return to filming movies, Simon stated that he would like to start exercising first so he is in top condition to work. With his company’s understanding and support, Simon will use this opportunity to spend more time with his family. He plans on going on a vacation with his daughter and will let her decide where they will go.

Simon’s wife Qi Qi (琦琦) is very worried about his safety but also supports his decision to promote a movie that spreads positivity. For all future jobs in China, he will increase his personal security but he will not avoid crowds. “People need contact with others, and we need to have love for one another. Let’s look to the future! I am a person full of positivity!”