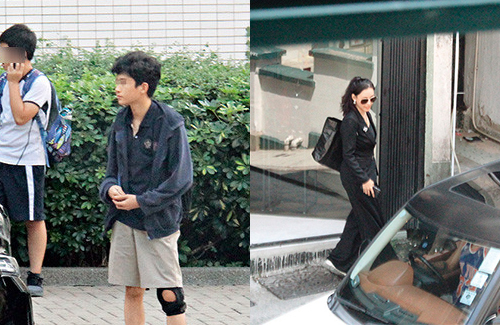 At 12 years old, Cecilia Cheung (張柏芝) and Nicholas Tse’s (謝霆鋒) eldest son Lucas Tse (謝振軒) is learning his independence. With a new business and the birth of his youngest brother Marcus, Lucas is spending lesser and lesser time with his mother.

For her three sons, Cecilia has moved back to Hong Kong full-time and reducing her workload in Mainland China. She is spending less time on screen and more time behind-the-scenes for her new fashion business, opening a new store in Central.

Lucas, meanwhile, has been in the care of his uncle Ronnie Cheung (張豪龍), who was seen picking up Lucas from his school in Sha Tin. Lucas was wearing a knee brace as he had sustained an injury from basketball. According to the paparazzi, Lucas wasn’t in a very good mood that day.

Cecilia and Nicholas divorced in 2011 and have two sons: 12 year-old Lucas and 9-year-old Quintus Tse (謝振南). Though they share custody of their two sons, Lucas and Quintus have been living with Cecilia since the divorce. Last year, Cecilia welcomed her third son Marcus Cheung (張禮承). She has not revealed the identity of his father.