Sire Ma and Lesbian Ex-Lover Had Outdoor Sexcapade in Vietnam 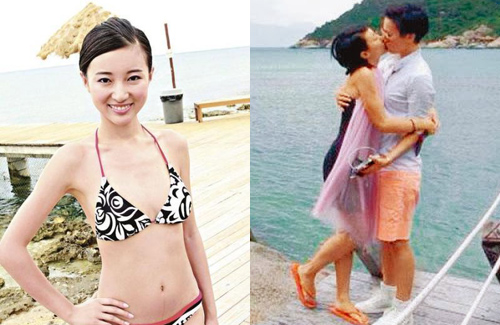 Since the explicit video of Sire Ma (馬賽) dancing in her lingerie was leaked earlier, her image has plummeted. Former lover, Wang Ziqi (汪子琦), spilled more dirty secrets about Sire’s habits inside the bedroom. Ziqi admitted that Sire’s bold love-making ideas, including role playing and outdoor sex, gave her a lot of excitement. But the good times faded quickly after Ziqi realized Sire’s manipulative and materialistic personality.

After being accused of leaking the dancing video, Ziqi angrily revealed that the clip was filmed on Sire’s camera. Sire also planned the lingerie seduction inside a Shanghai hotel while knowing that Ziqi was already married to wealthy mainlander, Laura Lee. Ziqi was tempted by Sire’s beauty and bedroom behavior. Ziqi revealed, “Sire prepared many uniforms, including a nurse and student outfits. She gave me a lot of excitement. In retrospect, I felt it was very absurd. When we vacationed in Singapore and Vietnam, we did the same. In Vietnam, she pulled me to a forest near the beach to [have outdoor sex],” Ziqi revealed.

Sire Was a Money Leech?

Prior to meeting Ziqi, Sire had an on-and-off relationship with her wealthy boyfriend of 10 years. They broke up when he left to study in England, but reconciled when Sire participated in the 2008 Miss Hong Kong Pageant. When Sire went on a trip to Europe with Ziqi and Laura, Sire sent text messages to the man asking for gifts of expensive designer handbags, but they were ignored. Since the man’s mother did not approve of Sire, their relationship fizzled.

While they were dating, Ziqi lavished Sire with expensive designer brands and a lofty monthly allowance because Sire said she did not have enough money to pay for her expenses. Ziqi said, “At the time, I really loved her and felt the need to take care of her. So I didn’t mind giving her $200,000 HKD monthly allowance.” Ziqi showed the text messages on her cell phone to prove her generous allowance.

After exposing Sire’s materialistic side, Ziqi went on to talk about Sire’s mother – who is a bigger money leech. When Ziqi first met Sire’s mother during her birthday party last October, Mrs. Ma asked Ziqi for the down payment amount for a house. Immediately, Sire said, “Let my husband (Wang Ziqi) give it to you as a gift!”

Sire even reportedly went as far as to demand for Ziqi’s wedding ring, in order to melt the platinum metal for money.

Ziqi regretted cheating behind wife Laura with Sire. When Laura found out about the affair, she started having suicidal thoughts. Laura once called Ziqi, stating that she would kill herself if Ziqi did not come see her immediately. Sire locked Ziqi’s cellphone in a cabinet and refused to let her pick up Laura’s next call.

The next day, Ziqi received texts from friends, explaining that Laura ended up in the hospital due to overdosing on sleeping pills. Blaming herself after Laura’s attempted suicide, Ziqi began regretting how poorly she had handled the relationship. The couple parted ways and is in the midst of a divorce, and now Ziqi can only beg for Laura’s forgiveness.