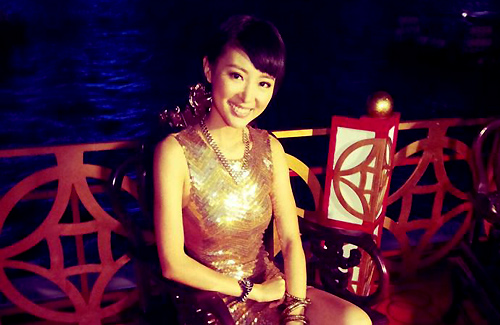 Sire Ma  (馬賽) has appeared in many TVB dramas since winning the Most Improved Actress award last year. With the wave of many popular leading actresses leaving for greener pastures in Mainland, Sire is taking advantage and moving up in the company with more prominent roles. With her role as Damian Lau’s (劉松仁) daughter in the Anniversary drama Silver Spoon, Sterling Shackles <名媛望族>, Sire has a chance to shine.

With her popularity on the rise, Sire is very lucky to have the chance in a lifetime opportunity working with TV King, Wayne Lai  (黎耀祥) for the first time in the new drama, Detective Columbo <神探高倫布>. Her dream came true starring opposite her idol. Sire is a big fan of Rosy Business <巾幗梟雄> and she had wanted to work with the talented producer, Lee Tim Shing (李添勝) before he retires.

Sire is very excited and happy to have the amazing opportunity to play a leading role in Detective Columbo. She felt extreme pressure in accepting the new challenge and worked hard to get herself into character.  Everyday, it was a challenge for her, especially the action and emotional scenes. She would constantly think about the best approach to portray her character.  Her mother and producer told her to leave her character behind after work, but she had a hard time doing so. Sire felt it was her responsibility is show her gratitude to the producers and TVB executives who have faith in her acting skill.

Emotionally Attached to Her Role

With the pressure and worries of not being able meet expectations, Sire tried very hard to grasp the character’s emotions. While filming one of the scenes at the Sai Kung Harbor when her character is cheated and lied to, Sire was so immersed in her character at that moment and could not stop crying. While driving home after filming, Sire had to park her car and cry yet again.

The character has taken a toll on her emotionally so she had a difficult time getting herself out of wrecked emotions. Sire told her mother, “I actually feel like life has no meaning and the world would be a better place without me.” Her mother was frightened by her comment and told her get rid of these negative thoughts.

Took Vacation to Shake Off Depression

Some of the veteran actors advised Sire that a good actor is able to get immerse into and withdraw from character, but she was unable to do so. She shared her concerns to her manager soon after. Sire was worried that she might be suffering a major depression and decided to take a break immediately after filming. She went on a much needed vacation to the United States. Afterwards, Sire felt relaxed and refreshed as all of the sad feelings disappeared.

9 comments to Sire Ma Under Extreme Pressure to Meet Expectations