Sisley Choi (蔡思貝) and Vincent Wong (王浩信) have had a very fruitful year with the success of Legal Mavericks 2020 <踩過界II>, which secured them the award for Best Actress and Best Actor. With the Lunar New Year coming up, Vincent hopes to return to the music scene, while Sisley wants to attempt the film industry. They both want to elevate their careers in the Year of the Ox.

Despite the pandemic, Sisley and Vincent have had a very lucky year with their careers. For Vincent, he has won more awards than he can hold. Aside from Best Actor, he also won the Popularity Award at the 2020 JSG Awards Presentation, which has sparked his interest to return to music. He said, “These past few years, I have only done covers of popular songs. I hope to spend more of my time now on music. I want to write music with a story inside. I have been an actor for so long now, which has distanced me from my singing path. I will engage in more music this year. Love songs aren’t for me, so I hope to take the R&B Pop direction.” 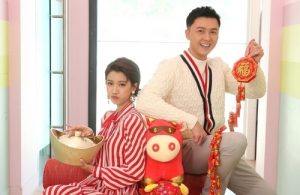 Meanwhile, Sisley couldn’t help but laugh when asked about her goals for this year. She believes that an actor’s path is really up to fate and opportunity. She said, “I have been filming dramas non-stop. I hope to share more sides of myself with viewers. I will continue to work hard this year and learn. I have signed up for Mandarin classes already, but I also want to learn piano and dance. I danced and even reached level eight piano when I was young, but I don’t remember it anymore.”

Aside from learning new skills, she also wants to return to the film industry. In 2015, Sisley was nominated for Best New Performer at the Hong Kong Film Awards for her performance in Keeper of Darkness <陀地驅魔人>. With such stellar recognition in film, she wants to try again. She said, “I didn’t know anything back then. I want to use my drama experience and see how that would translate into film. I am looking forward to it.”

Vincent then expressed that he also has an interest in film and hopes that people will approach him with new opportunities.

Bringing In the Lunar New Year

Coming from a northern Chinese background, Vincent shared that they wrap dumplings every Chinese New Year. He hopes to improve his cooking skills this year for his daughter. He said, “Dad cooks well too. I used to only eat, but time goes by so quickly, so I want to pass down some recipes to her. I wrapped dumplings with her this year. I made dumplings, but she made cars and snowmen – it’s definitely a bonding event.”

As for Sisley, she went abroad for school at the age of 10, so her only memories of Chinese New Year are from a young age. She remembers Chinese New Year to be very festive and happy because she is with her family. Since she is born in the year of the sheep, which conflicts with the ox, she shared that her mother has strategies for turning her bad luck into prosperity.