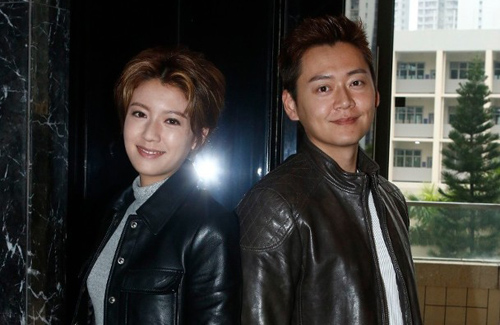 Becoming good friends after working together, Owen Cheung (張振朗) and Sisley Choi (蔡思貝) were seen teasing each other non-stop on the set of Legal Mavericks 2 <踩過界II>.

Besides the two, Vincent Wong (王浩信), Kelly Cheung (張曦雯), and Paul Chun (秦沛) were also present during filming. When talking about the addition of Kelly’s character to the show, Sisley revealed that Kelly’s character doesn’t have good intentions and even pretends to be blind to get close to Vincent in the series.

While Kelly and Paul are new characters added to the drama, Owen and Sisley reunite in the sequel. Asked if they’re bored of each other after having filmed three series together in the last two years, Owen laughed, “I’m not close with her at all. I would run the other way when I hear her name!”

When prompted about her rumored relationship with Hubert Wu (胡鴻鈞), in which it is rumored that Sisley has turned Hubert and Alfred Hui (許廷鏗) against each other, she replied, “This is just what the media reports. I don’t have such abilities. I’m here filming Legal Mavericks 2 every day, including 19 days of filming court scenes. My brain is full of legal terms right now – I’ve put in a lot of work and effort!” Asked when was the last time she saw Hubert, Sisley said she couldn’t remember and explained that she was in his car once because it was on the way to work.

In Legal Mavericks 2, Sisley said the biggest difference in her role is her prettier appearance. Although researching every single day for almost a month in preparation for this role, Sisley was still able to celebrate her father’s birthday on her day off earlier.