The story of Vincenzo revolves around an intelligent Italian lawyer and consigliere – a Mafia leader adviser – Vincenzo Casano, also known as Park Joo Hyung, played by Joong Ki. Adopted at a young age and brought over to Italy, he soon learned of the underground Mafia world and began working for them. However, Vincenzo flees to South Korea when conflict erupts between members of the Mafia. He later discovers that corruption and evil acts are also present in the country, so he teams up with ambitious lawyer Hong Cha Young, played by Yeo Bin, to fight for truth and justice. While their way of achieving so is through illegal means, it does highlight the necessity of achieving justice through other methods when laws are ineffective. 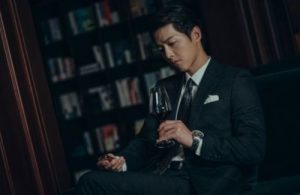 Fans are undoubtedly excited to see Joong Ki donning sleek suits after he soared to new heights of popularity with his soldier uniform in Descendants of the Sun in 2016. This time, Joong Ki plays a complicated character with excellent negotiating abilities and strategic gameplay when dealing with enemies. He expressed his enthusiasm and said, “I felt thrilled when I read the script. It’s not the type of standard cop and robber story in which evil is condemned and virtue is upheld. Instead, there are very novel ways of punishing evil.”

On top of the actors, viewers can also look forward to the quality of the production. It is written by Park Jae Bum, who worked on Chief Kim (2017) and The Fiery Priest (2019). Jae Bum will work alongside director Kim Hee Won, who produced Money Flower (2017) and The Crowned Clown (2019).

His parents dressed Song Joong Ki like a girl in his childhood because they really wanted a daughter.

Vincenzo exacts brutal punishment against his enemies in the finale.

All Song Joong Ki’s scenes in Italy were generated through CGI.

Photos from his college days show that Song Joong Ki’s looks are all natural.