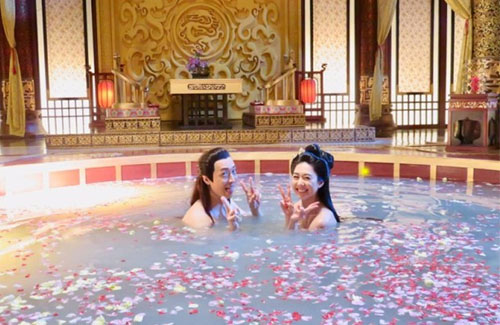 The Deep in the Realm of Conscience <宮心計2·深宮計> production team has been on a roll with their hygiene content. After Annie Liu (劉心悠) and Jacqueline Wong’s (黃心穎) bath scene, came another bathing scene involving Kenneth Ma (馬國明) and Edwin Siu (蕭正楠). This time, the focus lands on Steven Ma (馬浚偉) and Nancy Wu (胡定欣), our crown prince and princess.

Deep, a sister production to 2009’s Beyond the Realm of Conscience <宮心計>, is set during in the late 600’s, during the Tang Dynasty of China. Steven stars as the crown prince Li Longji, who later becomes Emperor Xuanzong. In the aforementioned scene, the crown princess and his wife, played by Nancy, take a soothing bath together under a romantic atmosphere. It was apparently a very fun and relaxing scene to do, as both Steven and Nancy compared the scene to doing a spa. Steven said, “The pool had warm water that had been sterilized and filtered. Everything was done very professionally, and the flower pedals in the pool actually smelled nice. I really felt like I was getting a spa treatment. I didn’t even care that my skin got all wrinkly in the end!”

As for filming the scene with Nancy, Steven said, “Having her with me was definitely made everything more pleasing to the eye! The atmosphere was great!”

Nancy said Steven was “very wild” during their scene together, saying, “He usually has his hair tied up for the role, but this time he had it down, and he looked completely different! This scene was just a very simple scene about a husband and wife bathing together.” (Any kissing scenes?) “We do kiss on the forehead.”

The actress didn’t expect herself to get so excited about doing her first period drama bath scene. She enjoyed her time in the pool, and imagined herself to be in a relaxing hotspring.

As for the floating tray of wine in the pool, Nancy shared, “It floated really well because Steven was supporting it with his legs!”