The drama gives Sunny the “excuse” to cozy up to Sheren, Bernice, and Hedwig.

“Couldn’t Bear to Leave the Set”

Joking that he could not bear to leave the set due to all the lovely ladies around him,
Sunny said, “I love being on set, because I can’t chat up members of the opposite sex outside of filming. This may lead to misunderstandings if photos are taken. But I don’t need to fear this on set and can ‘openly’ hug Sheren! I always say that our filming crew are like siblings who always stay behind and support each other wherever help is needed.”

In the drama, Sunny often drives his three female co-stars around, which the actor actually enjoys a lot, as in real life he only drives men around. 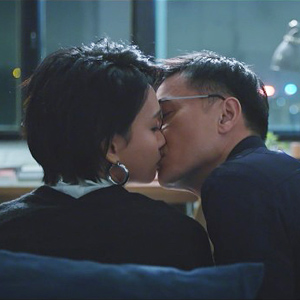 Besides Sheren and Bernice, Sunny also has scenes with 29 year-old actress Hedwig Tam. He mentioned a billiards scene where he allowed the actress to bring him into the romantic mood, as part of the plot where sparks emerged from the two’s close physical contact.

However, Sunny thinks that the intimacy level of the scene is merely scraping the surface. “Yes, there is (some) bodily contact, but it isn’t an intimate scene according to my standards!” He added how he felt that intimate scenes are like fighting sequences in the sense that actors needs to communicate well with the director prior to filming, to know where the cameras are so they would not be blocked.

As for Hedwig, she took away valuable lessons from the challenging scenes opposite Sunny and Sheren. Hedwig said, “Sunny has his own set of theories; he really knows what he wants and is very organized in how to deliver his scenes. In comparison, Sheren takes a softer approach; she will observe how you (deliver your lines) first and then think about how to take it from there. They are two different methods and I learned from them.”

Initially stressed about acting opposite an experienced actor like Sunny, Hedwig was able to perform naturally thanks to the veteran’s encouragement. “Sunny kept telling me to relax. Knowing he is not too uptight, I was able to let go of my anxiety and enjoy acting with him!”

Praising her other co-star Sheren for her professionalism, Hedwig shared, “Every time she watches a playback, she will make minor adjustments, and understand the character’s background and future developments in order to portray her role. That’s how professional she is!”