Malaysian Chinese actor Melvin Sia (謝佳見) was spotted at the Taiwan Pride parade on Halloween Day, kissing and holding hands with Taiwanese actor Mike Lin (林輝瑝). While it may seem like the two actors are declaring their relationship, they were actually at the parade to film their upcoming web drama series Papa and Daddy <酷蓋爸爸>, a story about a gay couple raising their son together.

Papa and Daddy is part of the Queer Up The Volume love series produced by GagaOOLala, a Taipei-based subscription service focusing on LGBT content. The series is one of the very few dramatic series in Asia that center its entire storyline around a same-sex family. 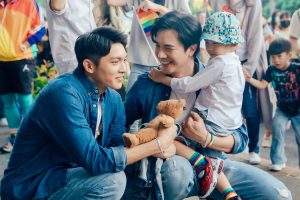 The scene filmed at the parade is about Melvin and Mike losing their son, “Kai Kai”, amidst the crowd.

Melvin said, “As we appear here alongside our LGBT family, although we are just playing characters in a drama, we are still able to feel the significance and impact of what this [parade] means.”

2020’s Taiwan Pride parade marks one of the very first large gatherings over a thousand people since the containment of COVID-19 in Taiwan. The parade also celebrates the first anniversary of the legalization of same sex marriage in Taiwan, the first in Asia. 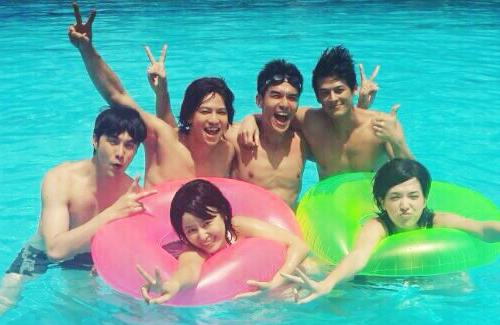 Ruby Lin and Leroy Young star in Taiwanese nostalgia drama, “The Way We Were”, which spans 16 summers and follows the lives of college friends after graduation.