Nostalgic Taiwanese drama, The Way We Were <16個夏天>, has been achieving moderate ratings since airing in July. Produced by Ruby Lin (林心如) for TVBS Entertainment, The Way We Were stars Ruby, Leroy Young (楊一展), Tiffany Hsu (許瑋甯), Melvin Sia (謝佳見), and Jason Tsou (鄒承恩) as a group of college friends who spent time together at the height of the late nineties.

The story spans 16 summers, from 1998 to 2014, and follows Ruby and Leroy’s love relationship which stemmed from a revenge plan to get back at Ruby’s boyfriend for being involved with another woman. Ruby tries to prevent heartbreak and stop herself from falling for Leroy, who is very popular among the ladies. Years later after college graduation, Ruby is now engaged to Melvin but finds that her previous chemistry with Leroy continues to linger.

To successfully take viewers on a trip down memory lane, the story incorporated many historical events that had occurred in the last 16 years, including the 729 national power outage, the 921 earthquake, the SARS outbreak, and the 2008 Beijing Olympics. The production also piqued viewers’ nostalgia by using popular music at the time during key scenes. The first episode, which takes place in the summer of 1998, opened with Wang Leehom’s (王力宏) 1998 hit single “Loving You is Loving Me” <愛你等於愛自己>. In the drama, Tiffany also performed Vivian Hsu’s (徐若瑄) classic single, “The Invincible Lovers” <不敗的戀人>.

Many netizens left comments on the drama expressing that time passes by too fast.

Newcomer singer-songwriter Eric Chou (周興哲) was given the task to write the drama’s ending theme song, “Don’t Be Friends Anymore” <以後別做朋友>. The young writer also made a cameo appearance in the drama and performed the theme.

Within a day of release, The Way We Were reached over 24 million views on the mainland Chinese video sharing site, iQIYI. Since its debut on July 19, the drama has stayed within the top two on iQIYI’s most popular dramas list. It is currently slated to air 15 episodes.

“The Way We Were” Trailer 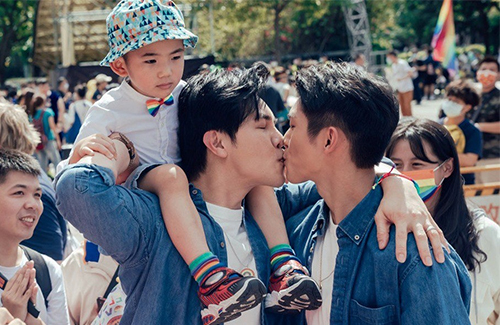 Taiwanese web drama “Papa and Daddy” is about a gay couple raising their son.