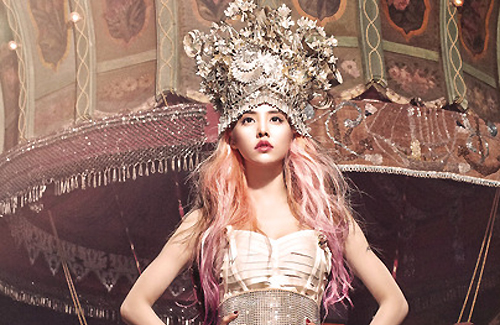 According to the information that were provided by entertainment managers, endorsers, music labels, and performance organizers, Jolin Tsai easily tops the list as this year’s highest-paid Taiwanese celebrity, earning an estimate of $741.5 million TWD in 2012. It is reported that Jolin earned over $711 million TWD by filming just 21 commercials, performing in 15 concert stages, and being involved in 34 stage performances. Jolin also earned over $30 million TWD in record sales from her latest album Muse, a top-seller.

Jolin has been doing well in maintaining both her successful career and love life this year. With more concerts planned in the future, the singer does not seem to be slowing down in money-making anytime soon. Expect to see Jolin remain on the list of the five highest-paid celebrities in the coming years.

Trailing second place is comedian host and singer Show Luo (羅志祥), his first year as number two. Unlike Jolin, Show had no concerts this year to add to his income, and relied on commercial filming, record sales, and hosting gigs. Nonetheless, 2012 has been a spectacular year for Show Luo financially, and it is estimated that he earned $623.1 million TWD in 2012.

Jay Chou (周杰倫) was not only a worldwide best-selling artist, but was also one of Taiwan’s highest-paid singers, and had consistently been so for the past 10 years. However, Jay Chou only landed at number three this year, at almost $50 million TWD behind Show Luo and almost $170 million TWD behind ex-flame, Jolin Tsai. But his romance with the 18-year-old Hannah Quinlivan (昆凌) is growing as passionate as ever, so it does seem that the musician really cares about earning a few dollars less when love is all around.

Coming to a close fourth is Taiwanese American singer-actor, Leehom Wang (王力宏). Like Jolin Tsai and Jay Chou, Leehom Wang is also a singer who is seen on the highest-paid list each year. This year, Leehom only filmed thirteen commercials and had two stage performances, but his fees rose exponentially. He performed in over 30 shows for his Music-Man II world tour, and filmed two movies. With only $35 million TWD behind Jay Chou, Leehom earned $539.5 million TWD this year.

Fifth on the list is Taiwanese Canadian singer, Elva Hsiao (蕭亞軒). Although the 33-year-old’s romantic rumors with the 21-year-old Kai Ko (柯震東) has made her a figure of hot gossip, Elva did not slow down her work. She filmed 11 commercials and was invited to 70 stage performances ranging from mainland China, Taiwan, and Hong Kong. Her latest music album, I’m Ready <我愛我>, also earned over $50 million TWD in record sales.