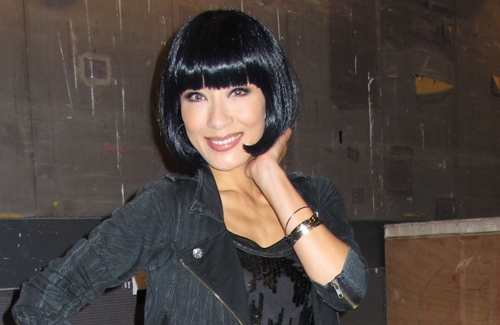 Tavia Yeung (楊怡) portrays a nightclub dancer for the first time in the new drama, A Great way to Care 2 <仁心解碼II>. The crew and some of the cast members filmed on location in the busy neighborhood of Mongkok. In one of the scenes, Tavia, and triad member (Jonathan Cheung 張頴康) negotiate loudly on the busy street. Their argument escalates into violence and Tavia is eventually shoved into a wall. The situation gets out of hand until a policeman walks by, and they both pretend to be friends to resolve the problem.

Tavia and Jonathan have collaborated together in many TVB series, allowing them to develop a good working relationship due to Tavia’s straightforward and outgoing tomboy personality. The action scenes with Tavia went without any problems. Jonathan Cheung said, “Some of the scenes require a lot of pushing and shuffling, and I am afraid of doing these kinds of scenes with girls, but Tavia is easygoing and can easily get into her character quickly.”

Portraying a nightclub dancer for the first time, Tavia really looked the part. She did a great deal of preparation and research to play this role. Tavia said she had to learned how to talk tough and she even observed the behavior of some wild girls. Tavia said that the worst part about portraying a nightclub dancer was having to smoke cigarettes constantly, and she is not a smoker in real life.

Tavia revealed her character is actually an undercover cop. She will have a relationship with Ben Wong (黃智賢 ).

Tavia is also reunited with her former costar, Alex Fong (方中信), in the new drama. Alex is known to be a cheerful costar who loves to play pranks on his costars during filming. When asked whether Tavia was one of his victims, she laughed and said, “I have worked with Alex quite a few times; we have a great chemistry. Uncle Fong is talking slower nowadays and cannot fool us as easily!”