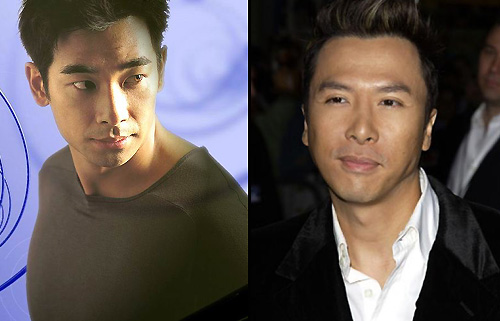 Since the production crew of Special Identity <特殊身份> unilaterally announced on February 29th that Vincent Zhao (赵文卓) had officially stepped away from the Chinese film, rumors abounded as to the root cause. Numerous negative rumors had surfaced, claiming that Vincent Zhao was a difficult actor to work with  and reportedly refused to respond to filming notices. With his anger boiling over allegations that undermined his reputation, Vincent Zhao finally broke his silence. In an interview with Jinghua News, Vincent Zhao blasted Donnie Yen (甄子丹) for his domineering ways and unpleasant work ethics!

The first time that Vincent Zhao had met Donnie Yen was at the Beijing press conference announcing their partnership in Special Identity. During the filming process, Vincent and Donnie did not share any deep conversations. Vincent cited personality differences, as Donnie often responded in a curt manner without follow up.

One of Vincent’s friends informed him that Donnie Yen possessed a habit of frequently modifying scripts. Vincent revealed, “While I anticipated our scenes together, I was also anxious about his script revision habits. I included a clause in my filming contract stipulating that script revisions need to be approved by me. This was a rare practice and the first time I inserted such a clause in my contract.”

Vincent alluded that Donnie’s domineering reputation was not without reason. Over the course of his 20-year acting career, Vincent professed that he has never worked under such unpleasant filming conditions. The production crew for Special Identity, consisting of Donnie Yen as Executive Producer and Action Director; Cheung Mong (张望) as Producer; and Clarence Fok (霍耀良) as Director, often argued vehemently on the set.

Vincent declared that he had agreed to film Special Identity due to the first-time opportunity to have “awesome sparring fights” with Donnie Yen in the film project. Filming started on February 8th. Vincent recounted that on the second day of filming, Donnie and Director Clarence Fok had an argument on set. “I understand Cantonese and the overall dispute involved problems with the characterizations. Clarence did not wish to make the changes, while Donnie demanded that the script changes were to be made.”

Vincent was asked to return to his hotel, upon which he waited for 7 hours before receiving notice to return to the filming set. Significant changes in the script were apparent, in which the characters’ personalities and behaviors changed dramatically. Vincent said, “One scene featured a dialogue exchange between Donnie and I, in which my character originally suppressed him in the exchange. After modification, Donnie’s character now suppressed me verbally. Fine, I put up with it at the time!”

Afterward, Vincent waited in the hotel for 6 days before receiving another filming notice. Around February 15th, the script was revised to reflect dramatic changes to Vincent’s character, without prior discussion with him. “Previously, Special Identity featured two main leads. After the script changes, many of my scenes were removed; I was completely altered into a supporting character! The most critical change was towards the personality of my character, who was originally very cold, but it was altered to a person who now slaps another man’s butt! I can no longer film for this project anymore!”

Kicked Out Without Notice

Vincent was originally the main villain in Special Identity and possessed significant screen time. After rounds of script revisions, his role was diminished to a supporting role. Vincent stated, “They violated the filming contract! On February 27th, I sought out the film’s producer, director, and Donnie Yen to discuss the direction of the script.”

During this meeting, Vincent also requested that the production crew issue a statement clarifying recent negative rumors regarding his poor work ethics. Vincent stated, “The people present at the meeting agreed to issue a statement on my behalf, except Donnie Yen, who did not say anything.” Even the film’s financiers had personally agreed to issue the statement to clear Vincent’s name. However, the following day, Vincent was notified that Donnie Yen did not agree to issue the statement. Vincent decided to issue his own personal statement denying the allegations, while thinking he would return to the crew to discuss the script further.

On February 29th, the production crew issued a press release stating that Vincent Zhao had officially stepped away from Special Identity, an unilateral decision made without discussions with Vincent Zhao, which further provoked his fury.

Asked what reaction he expected from Donnie Yen by revealing his filming experience in Special Identity, Vincent said, “I don’t care about his reaction, as I am speaking the truth! I considered for a long time before deciding to step forward. Stepping forward this time required my utmost courage! In the past, many actors were unwilling to speak up because they were afraid of being black listed and would not receive future jobs. I will stand in an upright manner, unafraid of being black listed. Even if I do not act anymore, I have to reveal the truth! China’s film industry is not up to standard; a lot of things are finalized by the domineering forces. Then what purpose does a contract serve?”

Director Clarence Fok stood behind Donnie Yen, praising him as a loyal person. Donnie Yen had rejected two film projects in order to film Special Identity, and did not receive extra pay for 6 months due to the delay in the filming schedule. Mr. Fok admitted that Donnie had scolded the action choreographer for not possessing a serious work ethic. Mr. Fok denied that there were frequent arguments on the set, “A group of men filming an action movie together–was there a need to say ‘please’ all the time? The use of rough words meant that we were arguing? I and cinematographer, Peter Pau (鲍德熹), get along well with Donnie Yen.”

Mr. Fok reiterated that Donnie had insisted on casting Vincent Zhao. Mr. Fok stated, “As for the filming clauses in Vincent Zhao’s contract, both Donnie Yen and I are not aware of the terms.” Cinematographer, Peter Pau, also complimented Donnie for his professionalism.

Special Identity producer, Cheung Mong (张望) noted that the script was not perfect, thus it was necessary to continuously revise it. Mr. Cheung claimed that the script revisions did not originate from Donnie, but rather from the production crew. “It is impossible that Vincent Zhao has not experienced such script revisions in his acting career. It was unimaginable that Vincent Zhao possessed a complete uncooperative stance; it was impossible for the production crew to work with him!”

Regarding Vincent’s allegations that his fighting scenes with Donnie Yen were cut, Mr. Cheung noted that it was an unnecessary worry, as these scenes were the film’s major selling point. “I can tell you that from the beginning until the end, Donnie Yen insisted on using Vincent Zhao. Otherwise, the production crew would not have agreed to Vincent Zhao’s domineering filming contract!”

Mr. Cheung also admitted that he had released public details regarding the high hotel expenses that Vincent had incurred, which Vincent noted that he would rather receive lower pay and nicer hotel accommodations. Vincent further challenged and countered why the production crew made an issue out of his hotel accommodations after filming had occurred.

Although contacted by the press regarding Vincent’s claims, Donnie Yen did not personally respond. His representative stated, “There is no need for Donnie Yen to respond to statements that do not represent the facts. It was Donnie who had initially recommended casting Vincent Zhao in Special Identity. When Donnie heard that Vincent refused filming notices, Donnie went to investigate the matter. If Vincent Zhao did in fact make such statements as referenced in the news, Donnie Yen is extremely disappointed.”

Jayne: There was a big misunderstanding, in which key decisions were not communicated properly to Vincent Zhao. Or rather many of the script changes and refusal to issue production crew statement backing Vincent’s integrity, were allegedly made under Donnie’s name. Did Donnie order such changes? No according to Clarence Fok and Cheung Mong.

I do sense that Cheung Mong did not have anything flattering to say about Vincent, while the other key production staff sounded more respectful.

Vincent’s testimony was quite clear and coupled with the others’ response, we get a good idea of what had occurred. Vincent appeared to also lack trust in Donnie in the beginning of their partnership, reading many negative signals in the crew’s behavior. Culture and communication issues that were not addressed properly?