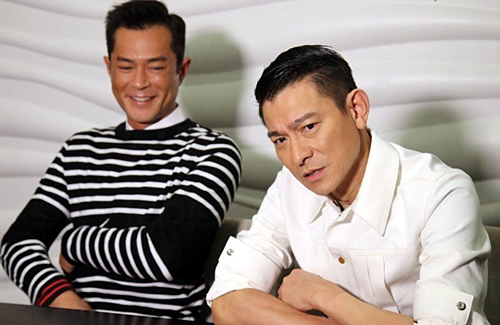 In the thriller The White Storm 2: Drug Lords <掃毒2天地對決>, Andy Lau (劉德華) and Louis Koo (古天樂) play two opposing characters who share a complicated history.  Although the two stars fight head-to-head in the movie, Andy and Louis are good friends off-screen and collaborated in several movies together. Playing the role of characters on the wrong side of the law, the two actors share how they worked together effectively.

The success of the movie comes from Andy and Louis’ ability to communicate through words and movement. For realism, the set used real knives in the scene where Yu Shun Tin (Andy Lau) chopped off the Fung Chun Kwok/Jizo’s (Louis Koo) finger. With great synergy and camera techniques, the scene was wrapped up quickly.

The two stars also collaborated for the theme song, “Brothers Don’t Suspect” <兄弟不懷疑>. Although the voice recordings were filmed separately, Louis shared that Andy was present for all the recordings. While Louis was worried about singing and would not listen to himself after recording, Andy joked that he had the opposite problem, and wouldn’t watch playbacks of his filming in case he didn’t look handsome enough.

As Andy reflected on his on-screen character, Andy comically shared that he was once mistaken for a delinquent in his childhood, “When I was in school, I was taller than other people around my age. Maybe they mistook me for a delinquent. Once I had an anti-triad squad arrive at the school to investigate and I was one of the students that they summoned.”

Andy also remembered that there were students that went astray after being perceived as a delinquent, “They were like Louis’ character. When friends deemed them as bad, they would continue being bad.”

Similarly, Louis saw himself in his character, “When people say I’m not good enough, I push myself to do well. When my dad said I wasn’t good at studying, I would push myself to get good marks.”

Louis added, “When I was young, I often had dinner at home and rarely interacted with other people. Now I often meet with my childhood friends for dinner and reminisce the happy times in our childhood. I often say: look back at your past; let the past go and we can still be good friends with each other.”