Traditional parenting, with its strict rules and discipline, has given way to modern parenting styles which emphasize empathy and bonding with children. Recalling their childhood in the 1980s, celebrities often recount the harsh discipline they faced as children when they misbehaved.

Although Bosco was a fairly well-behaved boy growing up, he had moments when he would incur the wrath of his parents. One time, he stole $5 Hong Kong dollars from his mother’s wallet to buy snacks. When his mother found out, Bosco was punished severely.

Recalling the moment, Bosco shared, “I was in first or second grade at the time. One day, I really wanted one of my favorite snacks, so I stole HK$5 from my mom to get it. When my mom found out, I was scared to death! She tied my hands and legs and hit me. My mother is relatively strict. I would need to be on my knees and admit fault before she would stop. After that, I never dared steal money again. I believe stealing was my mom’s bottom line.”

Similar to Bosco, Ali was also a good child growing up. However, she recalled a time when she angered her mother to the point of almost being blinded.

When she was a child, Ali really liked helium balloons. Since helium balloons were so expensive, her parents never wanted to spend money to buy one for her. One day, Ali found a discarded helium balloon near a trash can, picked it up, and brought it home. When her mother found out how Ali came to acquire the balloon, she insisted Ali throw it away. Ali stubbornly refused. “I really liked the balloon. My mother told me multiple times to throw it away, and I refused. I said to her, ‘I was lucky to find it! It wasn’t inside the trash can and I didn’t need you to pay for it, so why are you making me throw it away?”

When Ali refused yet again, her mother tried to use a chopstick to pop the balloon. Unfortunately, her aim was off and it hit close to Ali’s eye. Fortunately, she was only stabbed by the chopstick above her eyebrow. Even when the mother-daughter duo reflect on the situation today, Ali’s mother insisted the incident would not have happened if Ali were not so stubborn and kept talking back. 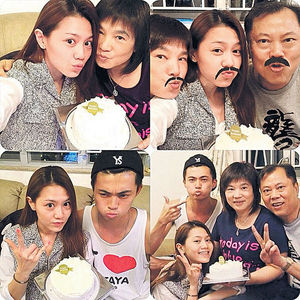 Recalling her childhood, Chrissie revealed she was a tomboy who was always out doing adventurous things. This caused her mother to often worry about her. Although Chrissie’s parents discipline their children strictly, they would scream and shout instead of using physical discipline.

Her father, who works long hours and would only return late at night, especially loved his children.  Chrissie recalled, “One time, my father promised he would take me out to play. However, he unexpectedly had to go back to work. At the time, I watched him drive off and ran after the car. I obviously wasn’t able to keep up, so I sat on the curb and cried. I really was quite a wild child!” 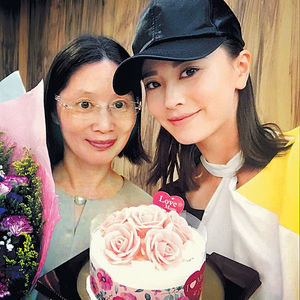 Rebecca shared about a time when she was disciplined by her father for bad grades. Typically a good student with good grades, Rebecca once returned home with an 85 test score in elementary school. She had copied her classmate’s answers and received the lowest test score she ever had.

When she revealed the score to her parents, Rebecca was met unexpectedly with her father’s anger. She recalled, “Usually, my father is a man of few words and often did not express any emotions. It is typically my mother who would verbally discipline me sometimes. But that time, my father was very unhappy and slapped me across the face. After that time, I learned my lesson and did really well in school. I received awards every year. My grades have always been stable and relatively good, so when they dropped suddenly, my dad was disappointed and unhappy.”

Schoolgirl Looks of 12 Celebrities Before They Were Famous

12 Korean Artistes Who Were Former Athletes