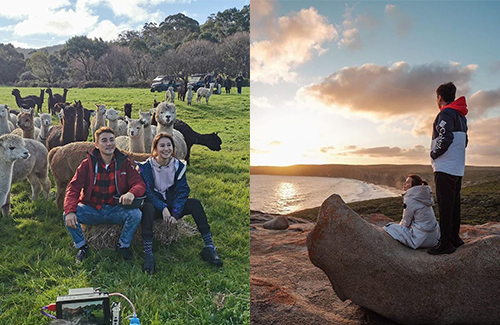 Tony Hung (洪永城) and Priscilla Wong (黃翠如) were unbreakable when they first joined TVB. Both were former Cable TV hosts. Both joined TVB at the same time, and both started their TVB careers as travelogue hosts.

They often worked together and traveled together. They were a compatible pair that netizens and fans alike would support as a couple, but both went their separate ways when it came to their love lives. Priscilla eventually married actor-singer Edwin Siu (蕭正楠), and Tony Hung is currently dating model Inez Leong (梁諾妍).

But even then, their friendship did not waver.

In fact, Priscilla’s marriage brought them closer together. They grew more comfortable with each other in front of the media. They had nothing to hide. When TVB approached them about a new travel project, the duo immediately accepted the idea of traveling to Australia together. Here We Go Again <出走澳洲> is Tony and Priscilla’s first travelogue collaboration in five years, and fans were delighted about their reunion.

In a heart to heart segment for Here We Go Again, Tony revealed that he, Priscilla, and a group of old friends promised each other that the first person to earn HK$1 million would treat the group to a vacation. Tony was the first one to do so, but Priscilla said that to this day, Tony never treated her to a vacation.

Priscilla didn’t mind, of course, but it was fun to tease Tony about his broken promises. The two friends have always been close, and money never came between them. They were always there for each other; Tony shared that when he was at his lowest point, he borrowed a few thousand dollars from Priscilla. Fortunately, Tony is no longer in need to borrow any money, but Priscilla would often reminiscent the times when they would struggle together.

Even though the duo are close, Tony actually did not attend Priscilla and Edwin’s wedding. But Tony had an explanation—because there was a death in the family at the time, it wasn’t suitable for him to attend the wedding.

“It wasn’t because I was heartbroken,” Tony said with a laugh. “It was because there was a death in the family, so it wasn’t convenient for me to attend. Don’t misunderstand everyone! I do deserve a punishment for not going.”