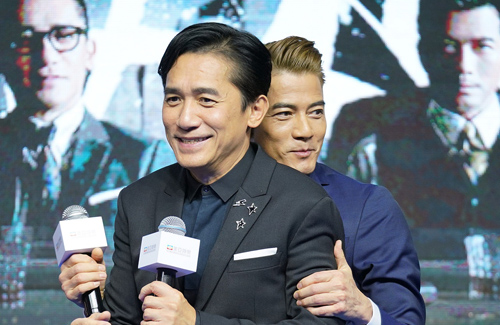 Though Tony and Aaron have both won numerous Best Actor awards, Theory of Ambitions is actually their first collaboration. It was evident that Tony and Aaron got along very well, as they were often photographed hugging and smiling together at the film festival today.

Tony shares that he has always admired Aaron, especially for his acting in Port of Call <踏血尋梅>, which was also directed by Philip Yung. Tony is very grateful to be working with the best, especially since Philip gives his actors so much freedom.

Theory of Ambitions brings viewers back to 1960 during a time of corruption within the Hong Kong police force under British rule. As Tony and Aaron climb higher in ranks and yearn for more power, the tension between them rises. Both realize that there is room for only one person at the top.

Originally scheduled to be released in 2018, Theory of Ambitions now sees a 2019 release date.