Tracy Chu Running On Only 2 Hours of Sleep 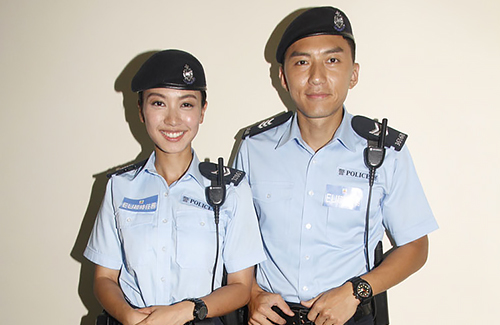 Being a leading lady is definitely not easy. Tracy Chu (朱千雪), star of the upcoming TVB action drama EU: Overtime Mission <EU超時任務>, has been shooting nonstop since last April. Not only is she running on only 2 hours of sleep every day, the 26-year-old rookie actress is also getting multiple bruises and scratches from her action-packed scenes.

Yesterday, the cast of EU: Overtime Mission filmed a trailer and promoted the series. After the shoot, Tracy and her costar, Benjamin Yuen (袁偉豪), accepted a mini interview. Benjamin shared, “Tracy has not slept since we started filming. She is the one who is suffering and working the most. I have to give her a like.”

Tracy said, “Getting 2 hours of sleep is already really good, but the crew has been good to me. They take care of me when I’m not working. When they know it’s not my time [to film], they would tell me to take a rest.”

Tracy revealed that she sustained a minor injury while filming an action scene a few days ago. “While I was falling off a cliff, the rocks and twigs scratched my belly. It was pretty bad.”

Benjamin praised Tracy for having great perseverance. “She’s so tired, but she still carries a good spirit. She really pays attention to the director and the action choreographers and do whatever they say. I find that really endearing.”

“But I also don’t know how to control my strength, so when I do fight scenes, I really do them. There was one scene where I had to slap [Benjamin] in the face, and I really did it. It worried me a bit, but he said he was fine.”