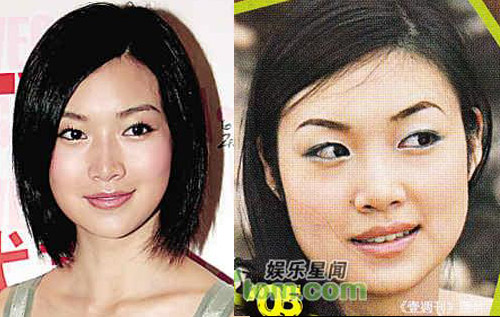 Model Jacqueline Chong Si Man’s recent admission of receiving breast implants was courageous. However, there are still a large number of artists who deny receiving plastic surgery procedures and insist that their features are natural-born, deceiving other people and themselves.

Miss Hong Kong 2005, Tracy Ip Chui Chui, has been playing “face-changing tricks” for several years. Since entering the Miss Hong Kong pageant in 2005, rumors accused Tracy of eyelid surgery and breast augmentation. Appearing at a function earlier, Tracy ’s features once again appear enhanced. Her nose bridge appeared straighter and higher, while her chin was more refined. All the wrinkles disappeared on the twenty-nine-year-old’s face. Her skin was creamy white and tender, similar to the texture of a baby’s skin.

Although the current Tracy is even more beautiful than this year’s Miss Hong Kong winner, Toby Chan Ting Yan, she continued to dismiss plastic surgery rumors. “It’s boring that the media always say I got plastic surgery!” Jayne: Aside from her nose bridge straighter and more refined, Tracy ’s jaw line also slimmed down significantly. She already had double eyelids in the Miss Hong Kong 2005 pageant, but her eyes do seem more vivid in recent photos. That could be due to better make-up application techniques though.