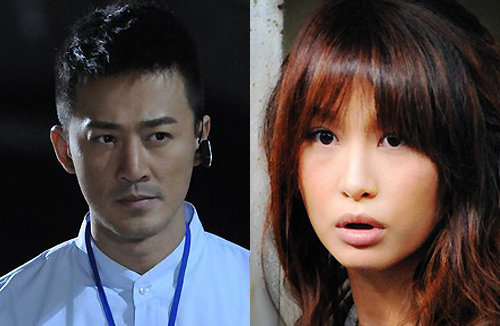 With only two months away from the 2012 TVB Anniversary Awards, it is not too soon to place our bets on which TVB actor and actress will survive with honor or with defeat.

Although the nominees list will not be released until November, many Hong Kong media reported that TVB executives have already chosen their ultimate winners. Through carefully planned marketing strategies, in which the dramas of favored artists are given a later broadcast date closer to the Anniversary Awards, the ultimate list of nominees would most likely be dominated by those actors who have appeared in the dramas that were broadcast in the last few months.

The top five nominees of Best Actor will most likely be Kenneth Ma (馬國明) for The Hippocratic Crush <On Call 36小時>,Bosco Wong (黃宗澤) for Witness Insecurity <護花危情>, Kevin Cheng (鄭嘉穎) for Ghetto Justice 2 <怒火街頭2>,Raymond Lam (林峯) for Highs and Lows <雷霆掃毒>, and Wayne Lai (黎耀祥) for The Confidant <大太監>. Out of the five, Raymond Lam is the candidate who will most likely win the award. Raymond is undoubtedly TVB’s number one biological son, since he has been leading in TVB dramas since 2002.

After signing a music contract with EEG in 2007, Raymond has released over seven full-length studio albums. He has won multiple popularity awards, and most of his albums are among the top 10 best-selling albums of the year in Hong Kong. However, as an artist who first debuted as an actor, a Best Actor award seems largely overdue, and TVB executives are very eager to give him the award this year. Along with Raymond’s large fan base, and his critically successful performance in Highs and Lows, Raymond has the highest chance of winning.

Kevin Cheng and Wayne Lai, however, are not very far behind in the race. Kevin Cheng will be nominated for his portrayal of “Law Ba” again; neither the actor nor the character has faded in popularity. There may be a chance for Kevin to be crowned TV King for a third time. Wayne Lai’s portrayal of “Li Lianying” in The Confidant is also highly anticipated. The Confidant is an expensive grand production, an anniversary drama, and is also the last drama to broadcast in 2012 that will earn a chance to get nominated for Best Drama of the Year. With strong leads and a competent supporting cast, The Confidant will definitely excel in the ratings department, and the cast may also get a popularity boost for the awards!

Kenneth Ma and Bosco Wong will most likely be the two dark horse candidates, thanks to the immense popularity of their dramas, The Hippocratic Crush and Witness Insecurity.

According to Oriental Daily, Raymond Lam has an 80 percent likelihood of winning Best Actor. Both Kevin Cheng and Wayne Lai have a 70 percent chance. Bosco Wong has a 65 percent chance, while Kenneth Ma has 50 percent.

The Best Actress award is slightly harder to predict. Kate Tsui (徐子珊) of Highs and Lows is currently leading the Best Actress race with her acclaimed performance. Along with Kate, Linda Chung (鍾嘉欣) of Witness Insecurity, Myolie Wu (胡杏兒) of Ghetto Justice 2, Tavia Yeung (楊怡) of Silver Spoon, Sterling Shackles <名媛望族>, and Michelle Yim (米雪) of The Confidant will most likely be the top five favorites to win the award among TVB executives.

Kate may be the audience’s favorite, but she faces tougher competitors than Raymond. Myolie and Tavia are favorites among TVB executives. Linda is backed up by a large fan base, and Michelle is an award-winning actress. Tavia’s upcoming Silver Spoon, Sterling Shackles is also another anniversary drama, which will most likely receive commendable reviews and high ratings as well.

Oriental Daily reported that Kate Tsui currently has an 80 percent of winning. Myolie Wu has 75 percent, Tavia Yeung and Linda Chung have 70 percent, and Michelle Yim has 50 percent chance.

Although the Best Actor and Actress awards tend to receive the most media attention every year, it is the Best Supporting Actor and Actress that ultimately receive the most recognition and critical praise from the audience. These awards are a chance for small “green leaf” actors and actresses for a shot of extending their career in the industry. Wayne Lai, Michael Tse (謝天華), Mak Cheung Ching (麥長青), Ben Wong (黃智賢), Susan Tse (謝雪心), and Sharon Chan (陳敏之) have attained higher successes and fame since winning in the Best Supporting category.

This year, Koo Ming Wah (古明華) of Divas in Distress <巴不得媽媽…> has jumped from a forgettable and unrecognizable mini-supporting actor to one of the most popular actors in the Hong Kong television industry. His portrayal of the effeminate “So Gay” was so popular that over 70,000 netizens voted for him to win the award in a pseudo online survey. Other popular candidates for Best Supporting Actor includes Ngo Ka Nin (敖嘉年) and Cheung Kwok Keung (張國強) of King Maker <造王者> and Ben Wong (黃智賢) of Highs and Lows.

Aimee Chan (陳茵媺) is the top candidate to win this year’s Best Supporting Actress award. The actress was previously attacked for having poor acting skills, but her performance in The Last Steep Ascent <天梯> became an eye-opener for everyone. Elena Kong ( 江美儀) of Silver Spoons, Sterling Shackles will most likely be nominated, but it is not likely that she will win.

Most Improved Male and Female Artists

As mentioned in multiple articles, the Most Improved Female Artist award will undoubtedly be given to Mandy Wong (黃智雯) this year. Having appeared in five popular dramas in 2012, no one has overcome her in turns of popularity and exposure rate.

On the other hand, the winner behind Most Improved Male Artist award is much harder to measure. At the moment, the top three nominees are eliminated down to three top contenders – Edwin Siu (蕭正楠), Oscar Leung (梁烈唯), and Him Law (羅仲謙). When it comes to popularity, Oscar and Him definitely has an advantage over Edwin. Oscar and Him are currently co-starring in the film Young and Dangerous: Reloaded <古惑仔: 江湖新秩序>, the remake of the 1996 crime film of the same name that starred Ekin Cheng (鄭伊健) and Jordan Chan (陳小春). Out of the two, Oscar has a higher chance of winning the award, as Him is not a managed TVB artist.

However, Edwin has the upper-hand with the TVB executives. Edwin will be co-starring with Ruco Chan (陳展鵬) in upcoming cross-millennium television drama, Big Wheel <巨輪>. He will also take the lead with Wayne Lai and Myolie Wu in the third installment of the Rosy Business <巾幗梟雄> franchise.  TVB executives are honing Edwin to become TVB’s next leading star.