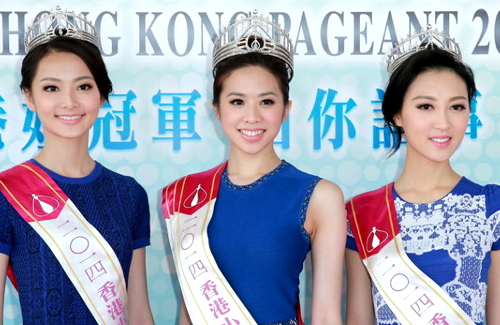 TVB has been scouting for new actresses to promote through its annual Miss Hong Kong pageant. Despite the glamor associated with the pageant, TVB reportedly offered this year’s contestants meager salaries of only $7,000 HKD per month for seven years.

With the exception of Miss Hong Kong winner Veronica Shiu (邵珮詩), who has confidence in breaking out in the entertainment industry through TVB’s support, many Hong Kong contestants are unwilling to sign management contracts and are looking for other options.

Veronica, who is from Vancouver and comes from a wealthy family, has the support of TVB executives and is willing to sign a contract despite the low pay. Since winning the pageant, Veronica has also been appearing in many talk shows and promotional events, earning appearance fees in addition to her TVB salary. Veronica may also replace Skye Chan (陳倩揚), who is on maternity leave on TVB’s The Scoop <東張西望>.

First runner-up Erin Wong (王卓淇) and popular favorite Sofiee Ng (吳凱欣), however, have not been receiving the same treatment and are considering to leave TVB. Sofiee’s boyfriend has ties to the film industry and she may focus on developing her film career instead.

With the exception of Sofiee, this year’s Miss Hong Kong contestants were not very popular with the public. The pageant’s prestige has been in a steady decline, as winners were often criticized for possessing plain looks.