By shirley on November 17, 2013 in Celebrity Weddings, Hot Gossip!, NEWS 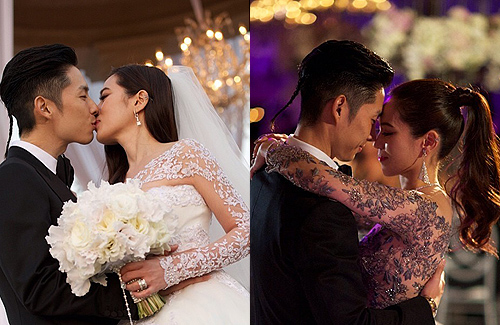 Thirty-five-year-old Vanness Wu (吳建豪), a former member of Taiwanese band F4, held his wedding ceremony with 31-year-old Arissa Cheo (石貞善) in the United States on November 16, 2013. After their marriage registration in Singapore earlier this month, the couple decided to hold a grand banquet at The Resort Pelican Hill, a 5-star hotel in Los Angeles.

Vanness and Arissa met in 2006 while filming his music video “My Kingdom” <我的王國>. Arissa’s father is a wealthy Singaporean businessman and initially disapproved of the relationship due to Vanness’ career in the entertainment industry. When Arissa studied in the United States in 2007, they split up but remained in touch throughout the years. The couple reconciled in 2010 and cherished their second chance in love. They became engaged last year. Reportedly, Vanness and Arissa wanted to keep their wedding ceremony low-profile, and did not invite many friends from the entertainment industry. The other three past members of F4, Jerry Yan (言承旭),  Vic Chou (周渝民) ,  and  Ken Chu (朱孝天) were not seen. Most of the guests consisted of close relatives who flew from different countries to attend the wedding. According to tabloids, Vanness agreed to pay for all their airfare and accommodation fees. The cost of the entire wedding event was approximately $1 million HKD in total.

Many fans actually flew to Los Angeles in hopes to witness Vanness’ big day. Unfortunately, they expressed disappointment, because the security guards prevented outsiders from entering the wedding venue. However, Vanness’ elder sister later uploaded photographs of the wedding online to share with fans.

Taiwanese singer, Elva Hsiao (蕭亞軒), was one of the performers at the wedding. She and Vanness sang “I Do” together, which was a very touching moment of the night. Elva later also agreed to take photographs with fans.

Arissa wore an elegant Canadian-Indian headdress, adding a traditional touch to her look. The couple handed out mini albums of their wedding photos as gifts to their guests. Vanness said they will try to be quick in having a baby.