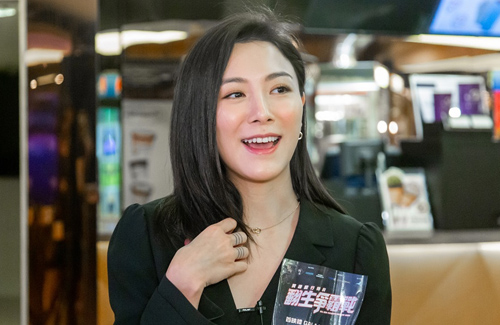 Since signing with Voice Entertainment in September, Venus Wong (王敏奕) has many jobs lined up for her. There are already plans for Venus to film a new TVB drama opposite Benjamin Yuen (袁偉豪) and Mandy Wong (黃智雯).

The role will require Venus to take on numerous action and gunfight scenes, which is a big departure from her former projects. With filming to start in two weeks, Venus admits that she is nervous about the project. “Since the producer selected me for the role, I’ll definitely do my best.”

Her husband Derek Tsang (曾國祥) cautioned her to be extra careful with the action scenes. Once she is immersed in the new drama, Venus will not be able to see Derek for over a month, as he will be going to China for a commercial filming project.

Though Venus signed with Voice Entertainment to further advance her music career, the company’s close ties with TVB also allow for more performance opportunities and exposure.  Asked if she will sing the theme song for her new TVB drama, Venus said she does not know yet but would be excited for the chance to do so. Glad that Voice Entertainment will help her balance time spent between acting projects and new song releases, Venus said, “My boss Herman Ho (何哲圖) has been really nice to me. He does not want me to film a drama and record songs at the same time, because he is afraid it will affect the quality of my performance. So he hopes that while I am a singer, my original jobs will not be affected.”

Asked about the longstanding rivalry between label mates Jinny Ng (吳若希) and Hana Kuk (菊梓喬), who have been rumored to fight for the top artiste position at Voice Entertainment, Venus shrugged, “I’ve never paid much attention to these rumors. There are many people in the industry who are all very hard working. The most important thing is to focus on yourself and be the best that you can!”