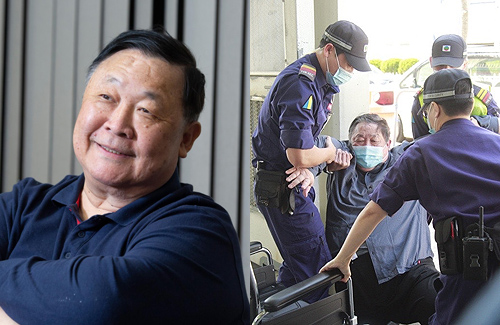 Last week, 72-year-old actor Chun Wong (秦煌) fell outside the front doors of TVB Studios after attending a promotional event Legal Marevicks 2 <踩過界II>. He had to be lifted into a wheelchair by security guards who immediately called an ambulance. Fracturing his shoulder, Chun Wong was hospitalized for one week is recovering well.

Entering TVB in 1977, Chun Wong is most notable in his performance in the 1980s adaptation of Legend of the Condor Heroes <射鵰英雄傳>, and has starred in many classic dramas over the decades. The portly actor is beloved for his comedic and lighthearted performances.

Since his release from the hospital, Chun Wong’s condition has stabilized and he is waiting for the bone to fuse together. His shoulder does not hurt except when he raises his arm. The doctor advised that he should make a full recovery in December, and he will have a follow-up appointment in two weeks.

Chun Wong suffered a fall due to losing weight too quickly. In May, he discovered that his sciatic nerves were being covered by his fat. He was motivated to lose weight due to the discomfort. He has currently lost seven inches off his belly, and his target is to lose a total of 10 inches.  “I was also admitted to the hospital in July because I had lost weight too rapidly. I didn’t have enough energy to walk. My legs were fine but due to long periods of sitting, I couldn’t adjust and lost balance.” He also pointed out that perhaps his method of holding his cane is incorrect, leading to his fall and eventual injury of his right hand.