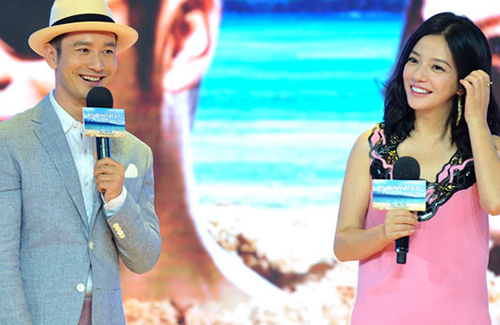 Hollywood Adventures, which also stars Tong Dawei (佟大为), follows three Chinese tourists who accidentally get wounded up in a smuggling operation, ending up in Hollywood. It is directed by first-time director Timothy Kendall and produced by Taiwanese American director Justin Lin (林詣彬), best known for directing The Fast and the Furious films.

The film, which had a China-wide release on June 26, held a press conference in Chongqing to promote the film. Vicki was asked on how it felt to kiss her close friend and classmate Xiaoming, to which she replied that she kissed him a lot more than people thought.

“There’s been rumors going around saying that we kissed more than once, at least six times. Some generously said over ten times. But in reality, it was over sixty times! We kissed so much our lips turned numb!” said Vicky.

Asking if they felt awkward doing the kissing scene, Vicki said, “We are professional actors. When we’re kissing, we don’t think about anything else.”